Does Gehry's memorial really look like a missile silo?

The Pritzker-prize winner's plans for The Dwight D. Eisenhower Memorial are rebuffed by the President's offspring

On Friday we explained how Frank Gehry's archtiecture studio overcame the structural challenges thrown up by its iconoclastic Guggenheim Museum Bilbao plans by reworking aeroplane-design software. Today, news reaches us that Gehry's designs for an Eisenhower memorial in Washington DC have run into similar difficulties, albeit of more human origin this time.

As Vanity Fair reported back in August, The Dwight D. Eisenhower Memorial Commission hired Gehry back in 2009 to design a memorial for the late US general and 34th President of the United States, to be built on a four-acre site in the centre of the US capital. 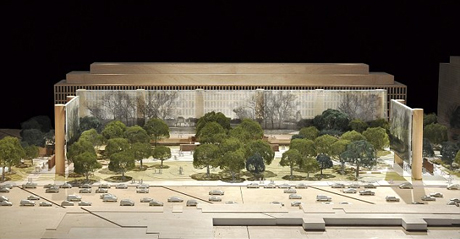 Gehry's plans, delivered last year, centre on a series of tapestries depicting scenes from the president's early life, using a technique of digital weaving pioneered by painter and Gehry associate Chuck Close which made for a timely interpretation of a public memorial.

However, Eisenhower's descendants have not taken to the plans. Susan Eisenhower, an international security expert and the president's granddaughter, "cited comparisons between Gehry's design and billboards, missile silos, totalitarian architecture, the fences around Nazi concentration camps, the Iron Curtain, and tapestries depicting Ho Chi Minh, Mao, Marx, and Lenin" according to Vanity Fair. 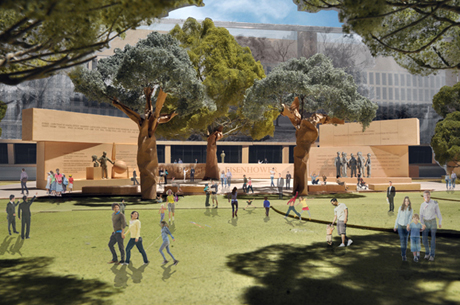 Now The Associated Press reports more sober critiques of Gehry's plan from John S.D. Eisenhower, the president's son, who believes the plans are "too extravagant" and "attempt to do too much."

Collectively, the Eisenhowers have managed to stall the project, putting back any building plans until 2013, while the conservative architecture lobby group, The National Civic Art Society, have pulled in some more traditional alternatives.

Which design will prevail remains to be seen, (though we certainly hope it's Gehry's). However, fans of modern and contemporary architecture needn't wait until next year to see great examples of visionary new buildings. Our 20th and 21st Century architecture books offer readers great insight into our beautiful built environment. Head there now, and see what Susan and co. are missing.