Many Belgian cities show the influence of the key modernist developments of the 1960s and 1970s and the legacy of that period can also be seen in contemporary building design, especially in the often playful interpretation of those modernist elements by contemporary architects. With this in mind, the editors at the Phaidon Atlas, our online architecture resource, have drawn together a selection of unusual new Belgian buildings for their latest focus feature. We'd like to share a few of their choices with you. From marinas with stacked wooden cores and stick frame windows, to glass skyscrapers flanked by concrete protrusions, here are four buildings boldly shaping Belgium.

House BM, Ghent, Belgium, Architecten de Vylder Vinck Taillieu BVBA (above) Trees were the starting point for this house. The architect's key document was a survey map with the exact position and diameter of every tree marked onto it, and so the house has been built around the trees. Structurally, the house is made up of two concrete slabs, supported by a set of upright, concrete plates. There's also a supporting chimneybreast too. The facade is made up of windows, 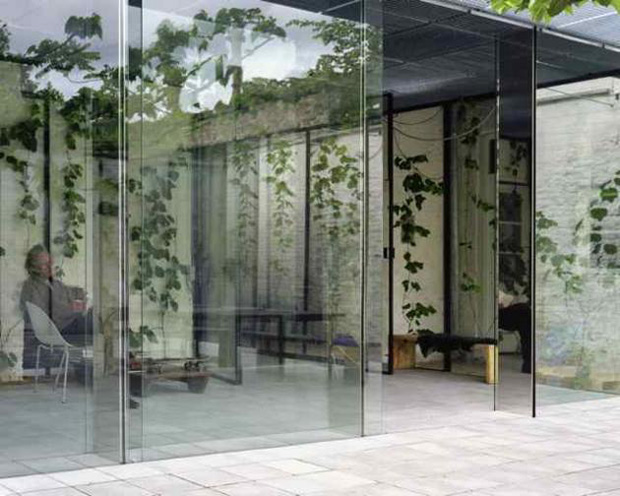 Summer House, Ghent, Belgium, Kersten Geers David Van Severen This Ghent summerhouse extension replaces a twentieth-century addition that had hidden the rear courtyard from view. In order to accommodate the new building, the kitchen was pushed back and the courtyard retained but adapted. Extensive glazing has been used to maximize sunlight and transparency. The extension is lightweight with the roof supported on six slender chrome fins, creating a stark contrast with the nineteenth-century studio house. Between the protected patio and the house is a glazed corridor that can be enclosed with sliding glass doors and acts as an intermediary space for observation. Black steel posts draped with grape vines frame the tiled courtyard. The original plants that stood on the floor have been replaced with wall plants in order to maximize the floor space. Mirrors have been installed in the corners of the courtyard to increase the sense of space further. Steel ceiling grills containing heating elements have been added for extra comfort. The architects felt that the previous property was built in response to practical considerations, whereas the new extension serves the sole purpose of facilitating the enjoyment of light and the experience of the seasons. 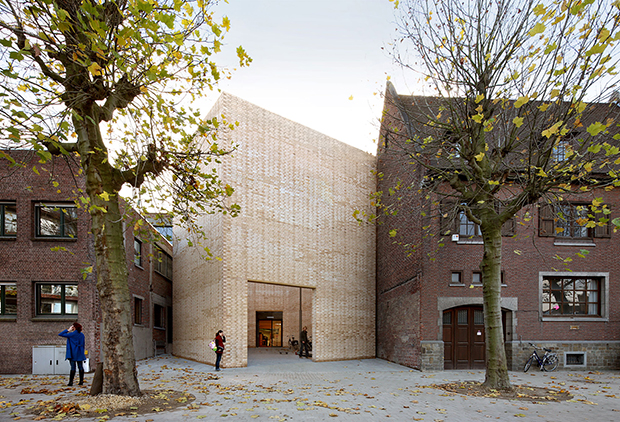 Buda Art Centre, Kortrijk, Belgium, 51N4E Welcoming visitors to this converted art center in the Flemish city of Kortrijk is a five-sided pavilion open to the sky. Positioned at an angle from the street's contour, this space encourages the public to filter through into the main studio and gallery. Built from sand-colored bricks, the light pentagonal structure contrasts the existing darker bricks of the surrounding buildings. A sensitive restoration of the existing structure, the design leaves much of the original plan intact and focuses on the addition of the pavilion and another pentagonal space. This sensitivity can be seen in the light placing of the pavilion within the site; its walls close to, but not touching, the adjoining walls. The second volume is created by excavating a space at the factory’s core, producing a three-storey atrium, which connects all the floors. A staircase wraps around this volume – a light filled space afforded by clerestory (above eye level) windows. 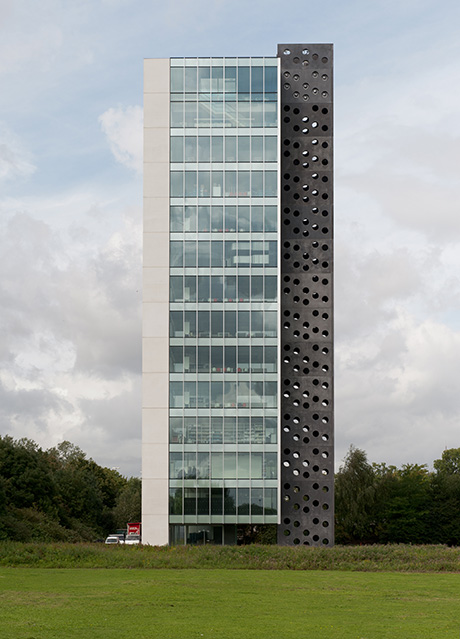 Elishout Kitchen Tower Campus Coov, Anderlecht, Belgium,  Xaveer De Geyter Architecten This 14-floor stacked tower is located in the Anderlecht region of Brussels. Its form is dictated by services and circulation routes that appear to hang from the main volume. These secondary masses span the entire length of the tower. Geometric in plan, spaces are configured around a central 12 m (39 ft) square plan. Here, eight identical kitchens are placed atop each other. Projecting from this plan are three separated volumes, each occupying its own elevation. Rectangular metal and trapezium-shaped concrete service cores are situated at the north and west sides, respectively. The rectangular shaft is a ground-to-top level staircase. It consists of metal plates with circular perforations for light and ventilation. Four thick-walled, structural cores on the south side provide support, simultaneously creating additional floor area for storage. Each volume serves a separate function that is visually expressed through the use of different construction materials.

If you like the level of detail in this story you can sign up for a free trial of our Phaidon Atlas here. The Atlas team are also tweeting at @phaidonatlas so check out their tweets and be sure to favourite and retweet anything you like. Meanwhile, for more on contemporary building take a look at The Phaidon Atlas of 21st Century Architecture and the Phaidon Architecture Travel Guide App.