18 planes, 36 points, and 54 lines of the spiralling ribbon which defines its living spaces - the clue is in the name

One tends to associate architect Daniel Libeskind with rather thoughtful and high concept flights of architectural fancy. After all, this is a man who subscribes to a belief in the healing power of architecture. So we were surprised to hear that his recent 18.36.54 House in Connecticut takes its name from the 18 planes, 36 points, and 54 lines of the spiralling ribbon which define its living spaces. To slightly misquote an infamous British advert - it appears to do exactly what it says on the tin. However, the tin is actually bronze and everything on the interior is built in and custom – adhering to the planes, points and lines of the outside. This causes the whole structure to work as one, with each plane and line folding into one another ever so seamlessly. Which, on reflection, is actually very Libeskind. 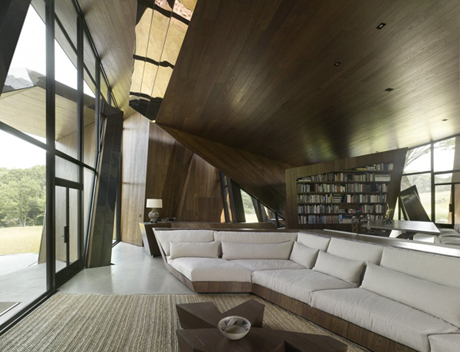