Not all great architecture begins with a bulldozer. From Foster + Partners’ reworking of Berlin’s Reichstag, to last year’s Stirling Prize winner, the partially ruined Astley Castle by Witherford Watson Mann, many of the most successful new buildings start with an older one.

The latest feature on the Phaidon Atlas brings together six of the most notable recent projects that began with an existing, historical building. These vary from derelict racecourse buildings to moribund gas works, yet the resultant buildings share common attributes. In each case, as our Atlas editors put it, “the effect is one of external juxtaposition, bringing a united, new program and adapting buildings to the 21st century.” 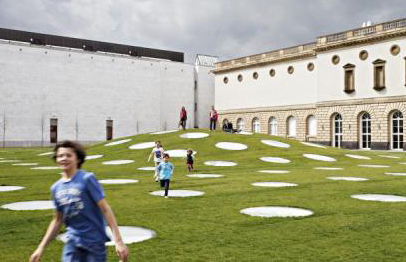 The outer surface of the doubly curved roof slab is covered by a total of 195 roof lights, varying in diameter from 1.5 m at the outer edge to 2.5 m at the highest point in the centre. These "eyes for art" were specially developed for the Städel extension and are supposed to be walked on. Daylight entering the exhibition space below can be controlled; either augmented using the integrated LED lighting system or mitigated by shading elements built into the roof light.

The entire slab is supported on just 12 reinforced concrete columns. The extension lies below the water table and is anchored by 160 deep piles to prevent any movement. The overall concept and technical specification ensure this museum building is sustainable in all respects. 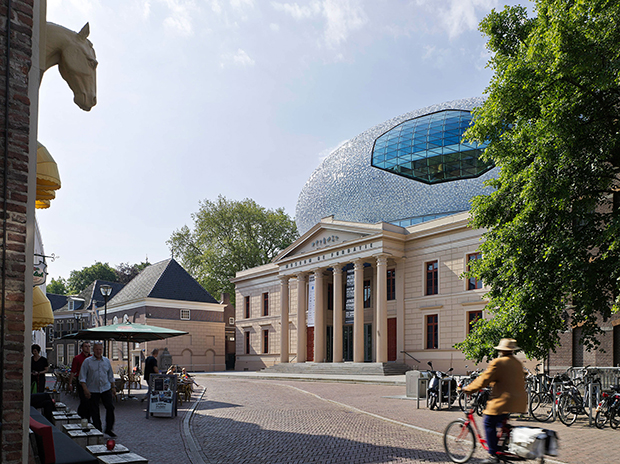 The museum has an extraordinary collection including works by Rembrandt, Turner, Monet, Rodin, Van Gogh, and Mondrian. In addition, the museum organises modest, yet much-discussed exhibitions. These temporary exhibitions became so successful that the museum required an extension. Architect Hubert-Jan Henket succeeded in persuading the museum not to add an extension next to the existing building: this would have destroyed its solitary and symmetrical character. Instead Henket designed an extension with an autonomous volume on top of the monumental building.

Right from the outset, both the governmental department responsible for the preservation of monuments and historical buildings, and local conservation societies were enthusiastic about the radical concept for the expansion. Planning permission was granted in record time. With its aim of presenting contemporary and old art in one building, the Museum De Fundatie also now has a new, truly unique identity. 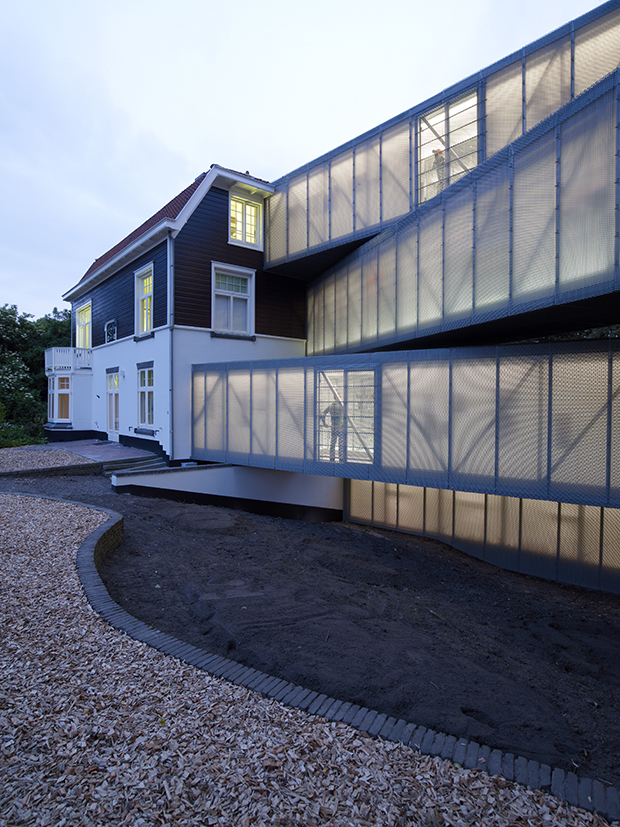 National Glass Museum Holland, Bureau SLA While the original commission called for this museum to be set across two separate existing heritage sites, the winning proposal linked these together through a unifying extension, and to so broke down the divide between the public and private spaces of the museum. This is achieved by having the staff work in the museum’s library, and encouraging the café to be used as a meeting space. Storage spaces are opened to the public through glazed shelving.

Four walkways were covered in aluminium mesh, one on each building level; these appear to expand the floor area across the two buildings; they also contain some storage areas. Exterior light shines through the mesh, translucent walls and the glass objects, illuminating the museum’s once-hidden archive. Few alterations were carried out on the original villas, and works instead focussed on specific repairs and removing some previous extensions added throughout the years. Despite its stark contrasts in form, opacity and ornamentation, the renovation still gives a sense of physical unity to the entire scheme. 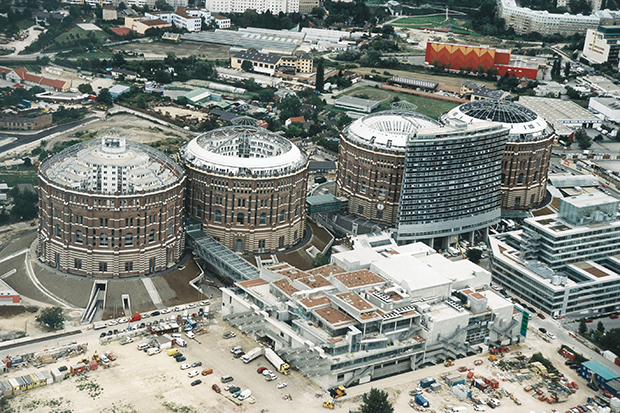 Gasometer B Apartment Building, Coop Himmelb(l)au The rebuilding and extension of the so-called Gasometer, four cylindrical gas tanks built in the 1890s, is an urban mega-project undertaken by the Vienna city council. This formerly industrial area was subject to a large-scale transformation and. The project provides a hall of residence for local students, a council archive, an event hall able to accommodate 4,000 people, numerous offices, an underground car park with 900 spaces, the obligatory shopping mall connecting the four buildings, and over 600 apartments. Several architects of international renown were invited to participate in the design, and Coop Himmelb(l)au, Wilhelm Holzbauer, Jean Nouvel and Manfred Wehdorn were all involved in the planning. Gasometer B, designed by Coop Himmelb(l)au, is notable for its transformation on both the inside and the outside. A shield-like building reclines against the existing structure in a succinct gesture to the old listed buildings. A large, airy courtyard in the centre of the Gasometer reacts to the essential unsuitability of the building. Light and air is thus provided via this cylinder 72 m (235 ft) in diameter. Despite criticism of many aspects, including the lack of vegetation, bad housing quality and traffic noise, there has been high demand for the apartments. 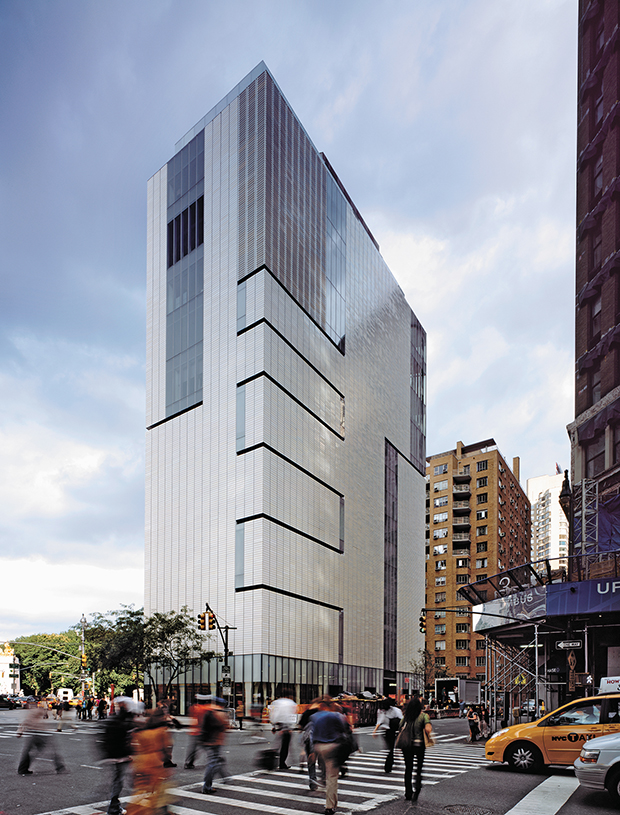 Museum Of Arts & Design, Allied Works Architecture Seated at the southwest corner of New York’s Central Park, Allied Works’ redesign for the Museum of Art & Design has dramatically transformed the eccentric mid-century building while preserving its sense of presence. The facade, clad with custom-made iridescent ceramic tiles, is divided by bands of transparent, fritted glass that wrap around the building. The use of ceramic and glass highlights the museum’s extensive collection of artefacts made from both materials. The ground floor arcade of the original design has been placed behind glass and incorporated into the building’s new entrance hall.

The glass bands are also present in the building’s interior, where they bifurcate sections of the floor and walls to create visual unity with the exterior and fill the gallery space with natural light. The exhibition space is arranged in small but elegant rooms over the building’s eight floors, which also incorporates educational facilities, studios, offices and a restaurant. The restored auditorium, which reuses materials from the original design, sits below street level and provides a space for performances.

In its sensitivity to and reuse of the original structure’s formal and aesthetic elements, Allied Works have created a powerful and appropriate tribute to the changing nature of design. 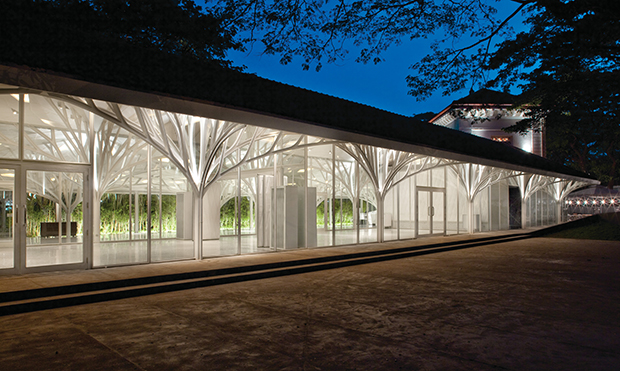 The Tote Restaurant, Serie Architects A series of disused colonial-era buildings have been converted to incorporate a banquet hall, restaurant and bar. Located on the grounds of the Mumbai Race Course, this building takes its inspiration from the rain trees (albizia saman) in the surrounding landscape. A steel structure, with trusses and laser-cut, branch-like sections, tapers as it reaches the ceiling. Floor to ceiling windows also blur the line between the building’s exterior and interior spaces. The steel branches also separate inside, the wine bar, restaurant and banquet areas.  The lighting scheme also references the trees. Irregular slits and openings have been cut into the building’s ceiling to allow in daylight. On the upper level, light fittings have also bee a fixed to the branch-like structure, reflecting the Tote’s natural surroundings, while also illuminating the room.

Want to find out more? Remember you can see additional images, plans, and much more at the Atlas. And you can sign up for a free trial here.