Cassius Clay first defeated Sonny Liston at The Miami Beach Convention Center in 1964 to become the Heavyweight Champion of the World. So, it's fitting that, a little less than 50 years later, the centre is the site of another world-class dust-up, this time between two leading architecture practices.

Both of these firms have been shortlisted to redevelop the convention centre, and both presented their vision to the Miami Beach City Commission last Tuesday. In truth both offer relatively similar (a fact acknowledged by at least one of them), albeit elegant solutions to the convention centre's problems.

Miami Beach Convention Center, built in 1957, is best-known to art lovers as the site for Art Basel Miami Beach; with its huge car park, wide surrounding streets, and lack of green spaces, it is functional, yet, in both firm's view, it has become something of an asphalt-covered aberration, cut off from the rest of the city.

Both Rem Koolhaas's OMA and Bjarke Ingels's BIG seek to open the space up, introduce gardens and squares, fitting the place back into the flow of civic life.

BIG has put forward something called Miami Beach Square, with a discrete ballroom and convention centre, Latin American museum, and even residential blcosk set into green space, which would accommodate smaller commercial concerns, such as "a shake shack, a bike rental, [and] a small gallery."

OMA, meanwhile, plans save space by switching the orientation of the convention centre by 90 degrees, altering the points at which the trucks deliver exhibition material and the crowds enter the halls, and doing away with wasted space. They've also hidden a multistorey carpark under a landscaped park and positioned the centre's hotel on the roof. 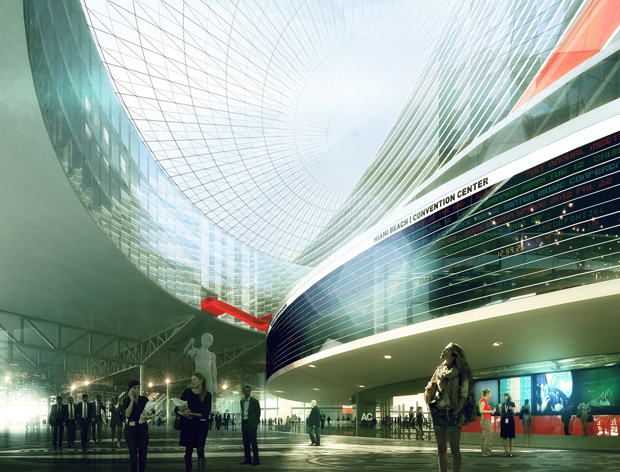 The local authorities should pick a winner next month. It's a tough choice. OMA's seems more elegant, while BIG's seems to offer greater variety, and perhaps a bit more civic life. However, what's interesting isn't the difference between the two proposals, but rather their similarities. Obviously, the brief and site have pushed both firms to make some obvious choices. Yet it's encouraging to see that, in a building as functional and boxy as a convention centre, walkways, gardens, and small business concerns are now an obvious choice for architects and developers alike.

Find out more about the OMA bid here, and the BIG bid here. For more on how we design and build today, take a look at our Atlas of 21st Century World Architecture.