We're not quite sure how to pronounce Madrid’s OOIIO Architecture but one thing's for sure - it seems to be at that point where it's getting lots of attention, even if it still has relatively few high profile builds to its rather tricksy name. It's already come up for one proposal for Iceland – a women’s prison – while a hotel by the practice in Ingolfstorg is currently in design development. Now, it's conceived a new HQ in the capital for the country’s Vigdís Finnbogadóttir Institute of Foreign Languages, which promotes the teaching of modern and classical languages.

OOIIO has envisaged a place for exhibitions, a theatre, café and library. It comprises three rectangular blocks of different lengths, which are joined in the middle around a square skylight. The public areas would be on the ground floor, while language lessons would take place on the second floor, and Vigdis would carry out its administration on the top floor. 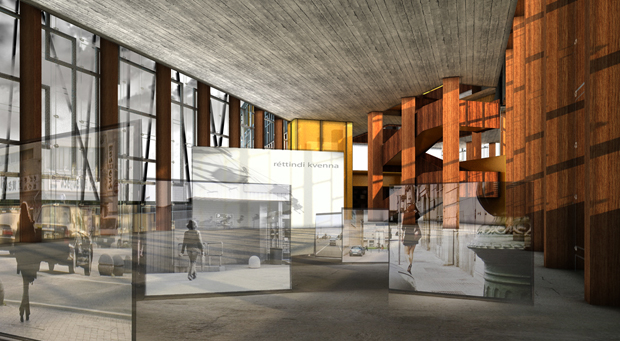 The architects suggest their scheme would be relatively quick and simple to put up. The structure is of sustainably-harvested timber, designed to be clad in pieces of mirrored glazing. Meanwhile the netted effect on its façade would be achieved by wrapping the entire building in recycled boat ropes – a reference to Iceland’s nautical past. Cleverly, the ropes would weave over the building more thickly where the sun’s rays heat it up more directly.

The architects – led by Joaquín Millán and Silvia Yi Wu Acuy - say of this secondary façade: “it will provide a singular look to the building.” They liken it to “the Icelandic sailor tradition or the Icelandic pullover patterns - very useful in the harsh winters”.