Dominique Perrault, architect of the French National Library, unveils the first of two towers in Vienna

The tallest building in Austria has just opened in the capital, designed by Paris-based Dominique Perrault, architect of the French National Library. The DC Tower 1 is 820ft high, (Renzo Piano’s Shard in London is 1004ft). It comprises 60 storeys of shops and a hotel on the lower floors, with offices and lofts above. At the top there’s a restaurant and sky bar.

Perrault and his team started on this 12 years ago, when they won the contest to design a building for the last empty lot of Donau City – the area on the Danube’s northern banks which started to take off in the mid 1990s. He sees DC Tower 1 as “a genuine entry gate to Donau City”, which will be joined by a second (though not as lofty) Perrault-designed tower in the next couple of years. 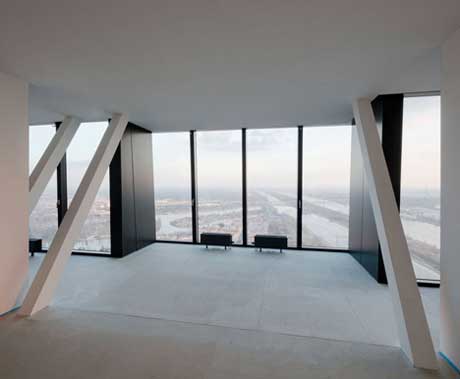 “The towers function as two pieces of a gigantic monolith that seems to have split into two unequal halves,” says Perrault, “which then open to create an arch with undulating and shimmering facades that bring the newly created public space to life in the void created there.”

The tall and svelte DC1 has a conventional façade on three sides, while the fourth side appears to be woven with glass panes. “The façade’s folds give the tower a liquid, immaterial character, a malleability constantly adapting to the light, a reflection or an event,” claims Perrault. 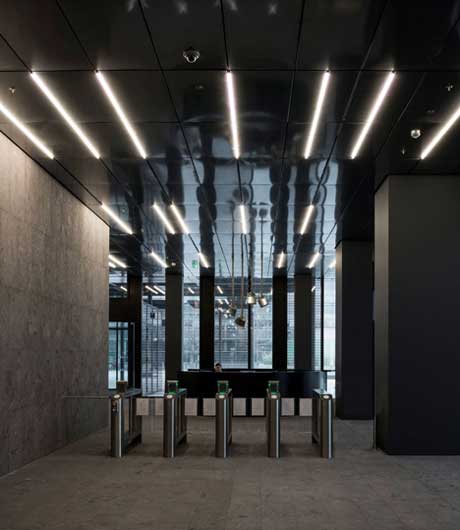 Unusually for a slick city skyscraper, the interiors have been left relatively rough and ready, with concrete exposed and plenty of stone and metal in the reception and communal areas. This is the work of  Gaëlle Lauriot-Prévost, Perrault’s associate designer.

DC1 is in good company: one of the first buildings to go up in Donau City was the Volksschule by Pritzker Prize-winning local, Hans Hollein.

For more on contemporary building, please take a look at The Phaidon Atlas of 21st Century Architecture, the Phaidon Architecture Travel Guide App, and our recently launched online Atlas. You can sign up for a free trial for that here or take a look at a great feature on its smallest buildings here.