Those with a head for heights and a spare $200,000 moved one step closer this week to experiencing the five minutes of weightlessness offered as one of the world’s first space-tourists. Although Richard Branson has yet to announce an inaugral launch date for Virgin Galactic, Sir Norman Foster’s Foster+Partners have declared Spaceport America open and ready for business.

The $209 million glass and metal futuristic structure (which took 6 years to build) looks appropriately alien, sited in an isolated spot in the middle of the New Mexico desert. The 120,000 square-feet building will act as both hanger and terminal and houses two WhiteKnightTwo and five SpaceShipTwo vehicles. 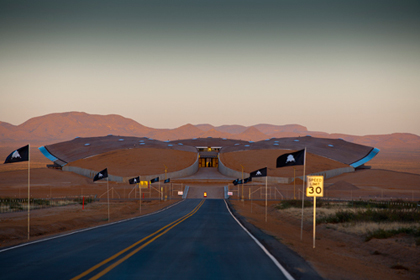 Hailing from working class beginnings in Stockport, England, Foster, who was knighted in 1990, has designed some of the most impressive structures of the 21st Century (30 St Mary Axe aka 'The Gherkin' in London, and Beijing Capital International Airport). Foster has won the Stirling Prize twice and The Pritzker Architecture Prize for his work. 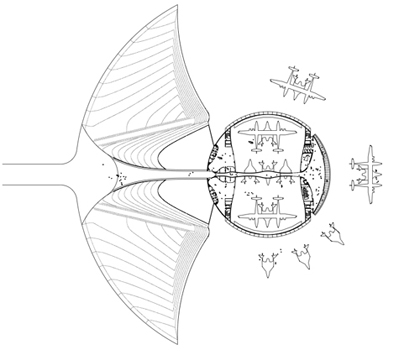 Foster + Partners' design for the hanger and terminal building

Foster’s sharp-edged modern designs are known for their efficiency and minimal energy consumption. Spaceport America’s low lying design, dug into the landscape, buffers the structure from the climatic extremes of the desert as well as utilising westerly winds for ventilation. Skylights which maximise daylight are another element of the structure's sophisticated design, securing its LEED gold status (the Leadership in Energy and Environmental Design certification program started in 1994 to encourage environmentally friendly architecture).

Don’t get your space suit on just yet though, as paid flights aren’t expected to take place until some time in 2013, and Trevor Beattie, James Lovelock and Sarah Brightman are already in the queue ahead of you.