French port turns its station into a theatre

The French port of Saint-Nazaire sits at the mouth of the Loire estuary. In recent years, the local municipality has earmarked the particularly run-down post-industrial site as ripe for regeneration. The centrepiece of this area is a neoclassical train station, which was badly damaged in WWII. And it's become the inspiration for the site's new theatre building.

The Saint-Nazaire Theatre by K-architectures

"The theatre draws inspiration for its materials and style from its immediate surroundings," say Karine Herman and Jérôme Sigwalt of K-architectures in Paris. "Its monolithic mineral bulk is borrowed from the giant bunker in the surroundings, and its rough-hewed shape is borrowed from neighbouring utilitarian designs."

Their design for Saint-Nazaire theatre comprises two restored pavilions - still bearing the scars from their war-torn past - linked by arcades. Behind one pavilion is the main new structure, a vast and brutal bulk which accommodates the blood-red auditorium and stage, with a capacity for an audience of around 800. The other pavilion houses the theatre's services. 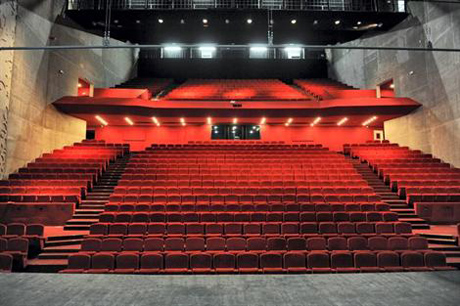 The Saint-Nazaire Theatre by K-architectures

While K-architectures' structure - viewed from the arcade - may appear historically sensitive to the point of pastiche, the effect is offset by the exterior detailing. "Here and there, it is adorned with a floral imprint pattern, inspired by a 17th century French silk textile motif," explain the architects.

These are prefabricated panels, perforated with the delicate pattern. This same pattern also appears on some of the auditorium's interior walls. The plain parts of the façade were cast on site. With surroundings this dramatic, could the building upstage the theatre's thespians? Perhaps.

For more beautiful tales from contemporary architecture, take a look out our Atlas of 21st Century World Architecture, featuring 1,000 of the most impressive buildings constructed within the past 12 years.