The aerial view of Brasilia’s competition winner for a new stadium appears to be on the move. The partially-covered athletics stadium – if it’s built – would be one of the venues for the 2016 Olympics. The south London-based architects Weston Williamson liken their design to a bird taking flight. That effect is achieved, they say, by the “massive feather-like structures that envelop the interior”.

The sense of movement would come from these feathery fronds reacting to wind and sunlight, “meaning that the form is constantly in flux”, the Londoners add. How that flux would impact on spectators and, more importantly Olympians, remains to be seen.

The stadium stands on a wooden plinth surrounded by water pools and dense greenery which would help to cool the site in the intense heat. In August it can get up to the high twenties centigrade.

Actually, most of the action will take place 1hour 40 minutes flight away in Rio de Janeiro. There, the 300-acre Olympic Park is being constructed on a waterfront peninsula in the Barra da Tijuca district. This will be the site of nearly half the Games’ venues, and is the work of London firm Aecom, who also created the London 2012 Olympic Park.

Before setting up Weston Williamson in 1985, the co-founders put in some time with a couple of big names. Andrew Weston worked with the then Richard Rogers & Partners on the new Lloyd’s Building, while Chris Williamson spent time with Michael Hopkins. In the last 18 years they’ve racked up some important schemes like Luton Airport and Paddington Station, as well as imagining some esoteric competition entries, such as their Vertical Zoo for Buenos Aires. If their Brasilia stadium design gets built, it will combine both skills. 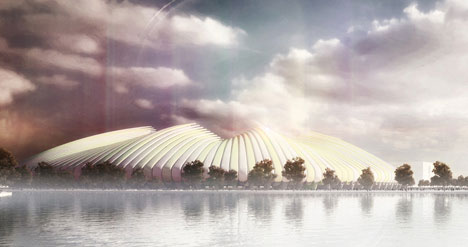 Remember, if you're planning a visit to an architectural destination in the near future make sure you download a copy of our great new Phaidon Architecture Travel Guide App before you set off. While most travel apps tend to point you towards a budget hotel or tell you the way to the airport only Phaidon's Architecture Travel Guide (available now for the iPad, iPhone and iPod touch) can tell you where you'll find the most important new buildings, wherever you may be in the world. From innovative Ethiopian tree houses through to Malibu's glass-skinned mansions, by way of galleries, offices, stations and flagship stores, you'll never be without something to gawp at admiringly. Read more about it here.