A canopied garden is to be built in Greenwich Village, on the site of the city's original AIDS hospital

New York's AIDS Memorial Park makes for an odd monument, since it sets out to commemorate something that is ongoing. As The AIDS Memorial Park's website makes clear, the proposed park is planned to “honour New York City’s 100,000 plus men, women and children who have died from AIDS, to commemorate and celebrate the efforts of the caregivers and activists who responded to fight the disease, and to recognise the ongoing crisis."

Nevertheless its site, on a 1,600-square-foot triangular patch of land at Seventh Avenue, 12th Street and Greenwich Avenue, towards the lower end of Manhattan, was once occupied by St Vincent's Hospital; and St Vincent's remains an auspicious address in the early history of the AIDS crisis, as it was here that  the first AIDS ward on the east coast of America was opened, back in 1984. 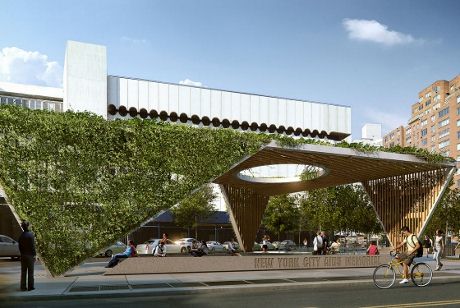 Of course, buliding a new park in New York was never going to be an easy process. However, towards the end of last month, New York's Landmarks Preservation Commission approved revised proposals put forward by the AIDS Memorial Park.
The plans, designed by the young local firm Studio a+i, are for, as The New York Times reports, “an angular, 18-foot-high canopy made of trellises densely planted with English ivy, Virginia creeper and honeysuckle.” Once constructed, the paper says the park will be “New York’s first prominent, free-standing AIDS memorial.”

NY Magazine liked the proposals, lauding the modest canopy, with its round cut-out over an etched granite floor and circular reflecting pool as a “modest, a tiny arbour parting tributaries of traffic.” 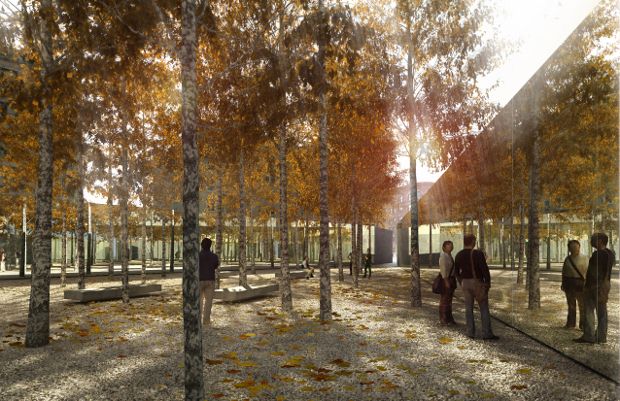 Studio a+i's original designs, for a walled birch park with mirrored sides, had to be shelved following residents' objections. However, now that this canopied park has received official approval, organisers say that, funding permitting, they'll have the monument built by 2014, bringing a subtle and fitting memorial to AIDS victims and sufferers in a city that experienced the vicissitudes of the disease more than most.