Architects seem to be getting more and more savvy about education. While budgets for school buildings have been slashed in the UK, elsewhere there’s plenty to shout about. The Spaniards can point to Guzmán de Yarza Blache’s elevated sports ground in Zaragoza, the Nigerians have NLÉ Architects’ floating school in Lagos, and now a Chinese primary school has a rooftop running track.

It’s part of an entire new school campus in Tiantai, a medium-sized city in the east of Zhejiang Province. The architecture practice tasked with the design of ChiCheng Second Primary School is LYCS, a three-year-old Chinese practice based in Hangzhou, founded by a collection of graduates from Princeton, Harvard and Tsinghua University.

LYCS’ scheme comprises a four-floor-high oval doughnut, with a more conventionally shaped square building of the same height attached to one corner.  One corner of the doughnut on the ground floor has been cut away and put on stilts, so that students can stroll straight into the open-air quad or plaza from the street. This is also where the students’ organised physical jerks will happen. 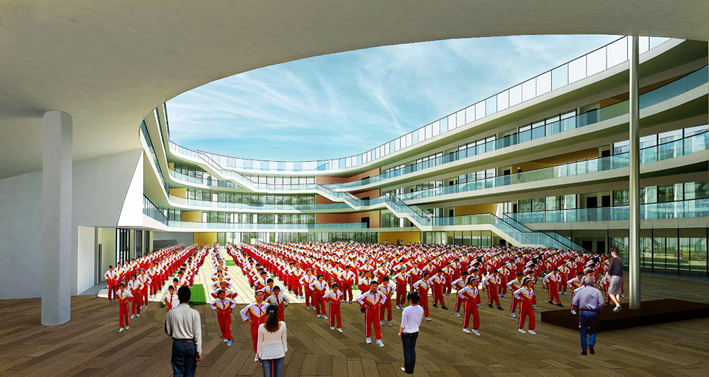 Both structures – which started on site last year - have plenty of floor-to-ceiling windows and a glass wall around the rooftop. Both roofs are given over to physical activities, with a sports court on the square building. It’s a clever solution for an incredibly built-up site. The neighbouring buildings are so close they’re almost rubbing up against LYCS’ building.

“The project’s ambition lies in creating a school that raises the level of educational facilities in the area, and a place that the residents of TianTai will be proud of,” say the architects.

What’s more, by putting the running track on the roof, the school’s footprint is much reduced, saving 3000sq m of space. Though why 10-year-olds need a 200m running track is another question. 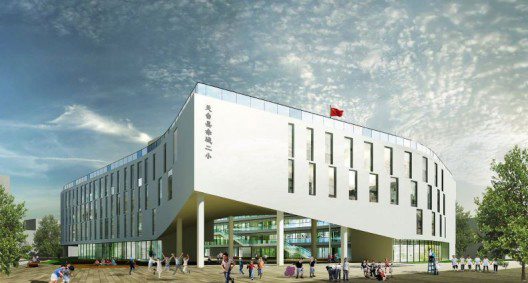 This building looks like it primed for success, which might help LYCS get their other design for the city - Tiantai State Grid Headquarters - off the drawing board. Take a look at the architect's plans here, and for more visionary building solutions, consider our 21st Century Atlas of World Architecture, which covers 1,000 of the most outstanding works of architecture built since 2000.