Crystal Palace Park in south London is a funny old mixture of steep slopes with Italian terracing, dinosaur statues from the Victorian era, children’s farm, and the National Sports Centre and Athletics Stadium built in the 1960s.

What’s not there, of course, is the structure that gives the park its name, as the glazed palace, burnt to the ground in 1938. But the structure designed by Joseph Paxton had done many decades of service in its location, having been relocated from Hyde Park’s Great Exhibition of 1851.

Now, the palace could return from the ashes – in a newly landscaped park – if Arup and a Chinese real-estate developer have their way. Mr Ni of ZhongRong Group says: “The former Crystal Palace is celebrated in China as a building of great achievement. Its ingenuity and scale is magnificent and this project is a once in a lifetime opportunity to bring it back to life. 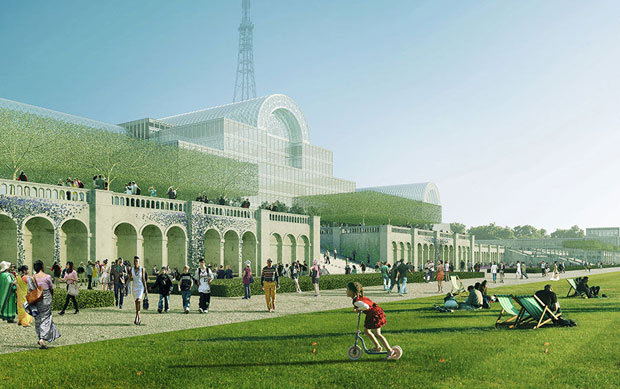 “My intention is to recreate the palace and restore the park to its former glory to create a new destination for local people and international visitors. The palace’s story is fascinating and I am hoping to add the next chapter by providing a gift to London and the world.”

The new Crystal Palace would be as close to the original as 21st-century health and safety, security and environmental issues allow. And that would be pretty amazing in itself. But the £500m scheme also includes a restoration of the park with new planting, a tree-lined boulevard, a new café and visitor centre and a repaired concert bowl. Now ZhongRong Group and Arup just have to win round the locals.

If this project interests you you really should try and take a look at The Phaidon Atlas of 21st Century Architecture. And, if you're off on a business or social trip anytime soon, make sure you download The Phaidon Architecture Travel Guide App.