It’s Friday at last and painter Antony Micallef has put together a very nice Phaidon playlist that will hopefully soundtrack your dinner party, wild night out or maybe just a few hours in the garden this weekend.

Micallef’s colourful mix of political imagery and contemporary expressionism has landed him exhibitions at Tate Britain and the Royal Academy. Collectors of his work include Angelina Jolie and Brad Pitt and a handful of Hollywood’s young, bright and beautiful. His paintings examine our relationship with consumerism and branding among other things. His work concerns itself with what he sees as the ‘frivolities’ of pop culture in a process that’s been dubbed ‘critical pop’.

“The trouble with pop imagery is that it doesn’t really go deeper than the surface,” he’s said. “You have to drag it down and challenge it to make it interesting. When you put two contrasting images together it causes friction and that’s the bit I’m interested in.”

Micallef’s big influences are Caravaggio and Velázquez and he was taught by John Virtue, a former student of Franz Auerbach. As well as the Tate Britain and Royal Academy shows he recently contributed a work to the British Heart Foundation’s Mending Broken Hearts appeal alongside Peter Blake, Gary Hume and Gavin Turk. He’s currently exhibiting at Lazarides Rathbone Gallery. 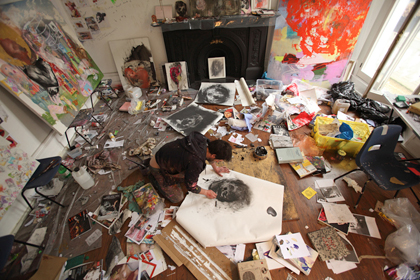 Antony Micallef in his studio

We’ve uploaded his playlist to Spotify, if you have an account you can listen to it here. But first, why not take a quick read about the thinking behind his choices.

“Listening to music in the studio while painting can be a real catalyst. It can suggest ideas, create moods and drop images into my head like slides. It’s one of the real pleasures of working by yourself. I’ve always found the crossover of how different mediums influence each other really interesting. I’ve always looked to music as inspiration to paint, as well as using visual stimuli. I often see music as laying down a colour wash in my mind. It creates an atmosphere which I try and follow. There are certain songs that sound how I want my paintings to look but trying to follow this fleeting vision is like trying to catch something in the air which constantly escapes you. My taste in music varies all the time, but these are some of the songs which have kept surfacing in the last few months.”

Velvet Underground - New Age I adore the Velvet Underground. The imperfections of this band are exactly what makes them so great for me. It doesn’t matter how much you want to be an artist, this band is a fantastic example of the very things you can’t learn. You either have it or you don’t. The chemistry is unique. The out-of-tune guitars mixed with Lou Reed’s wailing voice, give it a beautiful cracked veneer.

PJ Harvey - Down By The Water I’m so glad Polly Harvey is around in this world in this day and age. She writes about things that matter. I’m so endeared to her as a person - not that I know her. She seems to come across as a quiet soul offstage, but onstage she transforms into this power woman who just bleeds confidence and emotion. There are many songs I love by her, but I’m listening to Maketh Murder over and over again at the moment as I think it’s fantastic.  Also Down by the Water sounds like a beautifully dark nursery rhyme. The song is just perfect.

Maria Callas - L'Amour Est Un Oiseau Rebelle I love everything from Bizet’s opera ‘Carmen’, and I love listening Maria Callas singing this. I’m always in awe of this woman’s voice. She’s an amazing instrument. I still can’t believe that sound comes from a human. Listening to this on a sunny morning with the studio windows open feels cleansing. It’s all so grand. I have the same feeling listening to her as I do walking into a Baroque church. It’s all about theatre.

Ray La Montagne - For The Summer (Live)  I’ve only properly got into Ray La Montagne in the last year. Sometimes you want to hear things that are simpler, less produced and honest. This beautiful acoustic sound creates a bit of space for my mind. It’s like eating vegetables, my body needs it!

Radiohead - Karma Police I could listen to anything by this band. Their experimentation, and the courage to take risks artistically sets them apart from most others. (They’re) the perfect example of a band that grows in every sense and stays true to their art form no matter what the market dictates. In a world of Pop Idol and X Factor I’m so grateful they are around as an antidote, to compensate and remind us everything doesn’t have to be produced, manufactured and spoon-fed to us with as much emotion as a microwaveable PopTart. Thom Yorke’s voice is that of an angel gone wrong.

Peaches - Lovertits I’m a big fan of electro and I love Peaches. She has a certain sick glamour I like. If I could paint how Peaches sounds I would be a very happy man.

Elbow - Loneliness Of The Tower Crane Driver For me, the attraction of Elbow is that they’re incredibly genuine and honest. They have this great way of looking at the ordinary and making it into something very big. They romanticise those little things that sometimes I don’t see and when I’m reminded of them it makes me feel good.

The Knife - We Share Our Mother’s Health The Knife have a unique sound, an inherent darkness mixed in with simple, great melodies. I would imagine if a poltergeist picked up a copy of Logic (a computer program), it would sound similar to this.

Little Dragon - Looking Glass Little Dragon are a new pleasure for me. They seem sincere, inventive and playful. They have a quiet confidence which I find really attractive and I love the combination of a Japanese girl singer and Swedish boys.

Camille - Ta Douleur I only discovered Camille this year but she was a refreshing surprise. It’s not often you hear a track once and then suddenly think, ‘I love this.’ Everything just works. A great sound.