In an interview with Charlie Rose back in July, the American light-installation artist James Turrell was asked how he felt about his works being difficult to photograph. "Well," replied the artist, "someone has to make up for all the work that photographs better than it is."

It was a throwaway comment, but it still captured something of the year. Turrell, who marked his 70th birthday with five US exhibitions in New York, LA, Las Vegas and Houston, is known for works that can only be fully experienced in person. Yet this year, more than ever, big art events were experienced at one remove, and the ones that could be photographed, tweeted or videoed, gained the greatest audiences.

Despite being subject to a travel ban, Ai Weiwei still managed to assert his position as China's most provocative artist, creating a music video and heavy metal album themed around his 2011 incarceration, contributing to the German pavilion at the Venice Biennale, while still finding time to tweet, post Tumblr shots, and even do a little local hairdressing.

Damien Hirst opened his largest exhibition ever, in Doha in June; took possession of a 9,000 square-metre art studio, built for him in rural Britain, and backed a new housing development on the north Devon coast. 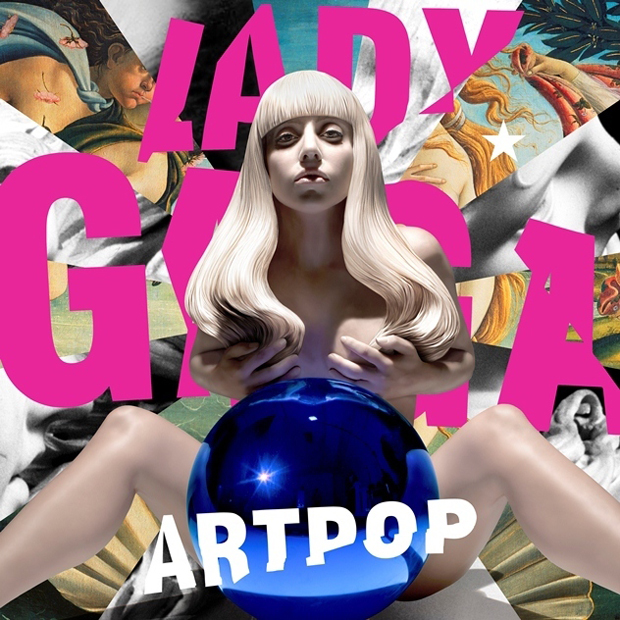 Jeff Koons, meanwhile, opened new shows at both the Gagosian and Zwirner galleries in New York during Frieze week, endorsed our Wild Art Book, combined one of his recent gazing ball statues with elements from Boticelli's Venice for Lady Gaga's Art Pop cover, and helped the singer stage an 'art rave' to promote her new album. Still, it was one his more straightforward works, Sacred Heart (Blue/Magenta), (1994-2007), that brought a crush of onlookers to the Gagosian stand at the Frieze London art fair this autumn.

Staying with art and pop for a moment, Marina Abramović, in between reaching her Kickstarter funding goal for her eponymous art institute and conducting, of all things, a Reddit interview, also put in a high-profile appearance in Jay-Z's The Artist is Present-style video for Picasso Baby, which was shot at The Pace Gallery New York back in the summer. 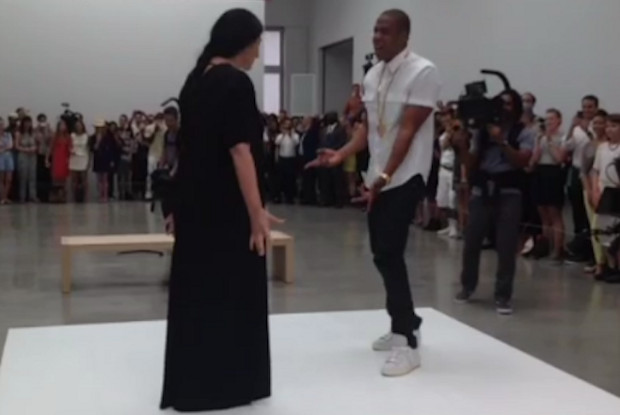 Marina Abramovic and Jay-Z at The Pace Gallery, New York, 2013

David Bowie collaborated with Tony Oursler for his first new video in 10 years, and was the subject of a highly acclaimed retrospective at London's Victoria & Albert Museum; Bob Dylan unveiled his first ever metal sculpture work at London's National Gallery; and Kraftwerk brought their techno-pop recitals, first heard in 2012 at MoMA, to Kunstsammlung Nordrhein-Westfalen in Düsseldorf and the Tate's Turbine Hall in London. 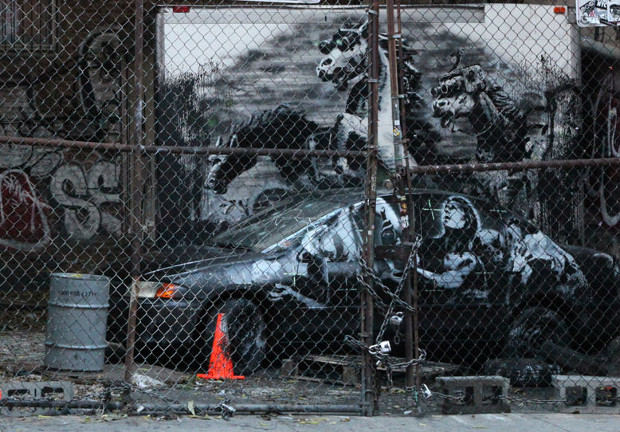 New York's Metropolitan Museum drew on a similar spirit for its blockbuster Punk exhibition. Subtitled Chaos to Couture, the exhibition certainly captivated the fashion crowd during its run May 9-August 14, even if the displays were a little too genteel and unfocussed for some visitors and critics.

MoMA's Le Corbusier exhibtion meanwhile, bore witness to an equally strident and modern vision, albeit all from the hand of one creator. The exhibition drew together extraneous paintings and sketches and placed them alongside better-known lamps, maquettes and even a fully restorted kitchen made by the design and architectural master. 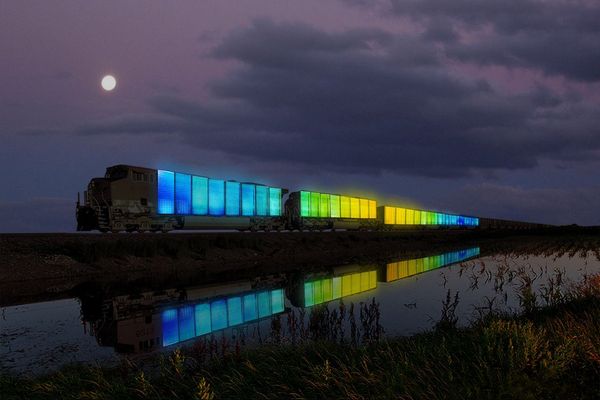 The Tate Modern's Paul Klee exhibition, which began in October and runs until 9 March next year, was a simpler exhibition, but no less delightful; critics were overjoyed with these charming, colourful 20th century paintings, drawings and watercolours.

Peter Doig's luscious retrospective at the Scottish National Gallery was met with an equally overwhelming response; as was Tate Liverpool's Marc Chagall retrospective.

Outside of the gallery system, Banksy staged a self-appointed 'residency' on the streets of New York, spraying up both simple graffiti and more involved street installations, throughout October. It culminated with an anonymous street sale of his work at giveaway prices - lucky for some buyers, unlucky for the many who dismissed the pieces as cheap Banksy rip-offs! 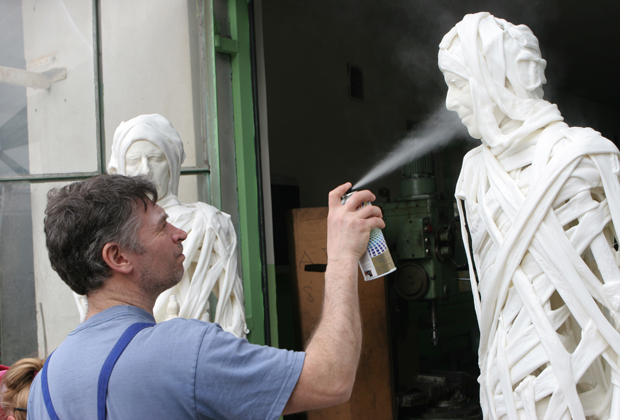 Doug Aitken also took the art outside, with his multimedia, art-train festival extravaganza, Station to Station. Art yurts, coloured smoke displays and drive-in style projections of Stephen Shore photographs entertained crowds across the US, at unconventional venues from New York to LA back in September.

Considerations of insider-versus-outsider artists were apparent at The Venice Biennale, where Massimiliano Gioni presented international exhibition, The Encyclopedic Palace; "an extended meditation on the artistic impulse", as former Phaidon Commissioning Editor Craig Garrett put it. This international exhibition was, as Gioni said, in part a comment on the impossible desire to know everything about everything in today's art world.

Pawel Althamer's Venetians, 90 figurative sculptures of the artist's friends simply occupying the Arsenale, served to illustrate the modern individual as voyager in this strange world. 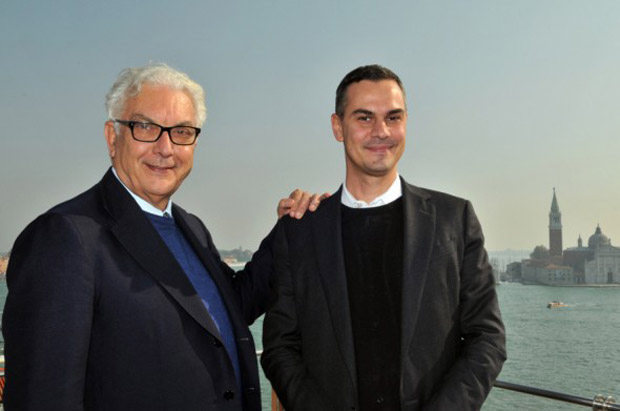 Yet, by placing works by world-famous names next to pieces by long-forgotten artists, Gioni was also perhaps suggesting that "what can be learned on a £60,000 MFA course can also be discovered in a coal pit in northern France."

More pressing political questions were brought to bear on the Istanbul Biennial this September, after plans to host exhibitions in some of the city's more marginal neighbourhoods had to be revised following the Gezi Park protests.

The Sharjah Biennial, held in the UAE city in the spring, produced no such flashpoints, yet its broad theme, of cultural relativism in an increasingly diversified world, was very much shared by the Istanbul event. 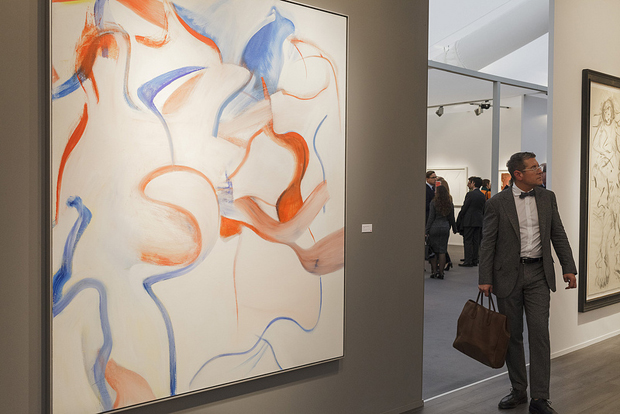 The big fairs reflected some of this diversification, with Art Basel hosting its debut Hong Kong fair in May. However, the big news remained restricted to the traditional business centres. Frieze focused its London fair more tightly, scaling back its ticket sales and reducing the number of galleries on show, while drawing a more conservative, wealthier crowd to its concurrent Frieze Masters event on the other side of Regent's Park, dedicated to galleries selling ancient-to-modern (not contemporary) artwork.

Art Basel Miami Beach meanwhile, also packed in the buyers, reporting record attendance figures and strong sales. Paris Photo LA made its debut on America's West Coast, while the original Parisian fair had queues around the block, along with high visitor numbers and strong showing from galleries - such as David Zwirner and the Gagosian - which don't specifically specialise in photographic sales.

At the auction houses, Francis Bacon's triptych of Lucian Freud sold for $142.4m at Christie's in New York in November, making it the most expensive work of art ever sold at auction. Warhol's auction record was also breached that month, when Silver Car Crash (Double Disaster) (1963) changed hands for $105m at Sotheby's in New York. Meanwhile, behind closed doors, Casino magnate Steve Wynn sold Le Rêve (1932) by Picasso to hedge fund manager Steven A. Cohen in a private sale in March for a reported $155 million. 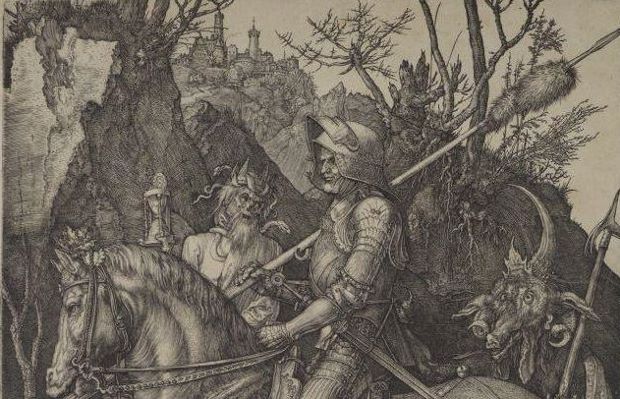 Detail from Knight with Devil (1513) by Albrecht Dürer. Image courtesy of lostart.de

Even more dramatically, news reached the wider art world of the 1,400 works hidden in the Munich home of Cornelius Gurlitt, the 80-year-old son of Hildebrand Gurlitt, a German art dealer who traded in "degenerate" art during the Nazi era.

The thieves who stole Picasso's "Tete d'Arlequin", Monet's "Waterloo Bridge", Lucian Freud's "Woman with Eyes Closed" and other works from Rotterdam's Kunsthal were sentenced to between six and eight years in a Bucharest court towards the end of the year, though the paintings have still to be recovered and some, at least, are feared burned by the mother of one of the thieves.

New York dealer Glafira Rosales pleaded guilty to her part in the sale of fake Abstract Expressionist works via New York's Knoedler; the paintings, sold as works by Mark Rothko, Jackson Pollock and Robert Motherwell, were in fact produced by an unnamed Chinese painter living in Woodhaven, Queens.

And, perhaps most unsettlingly, the City of Detroit, facing bankruptcy, announced that it was pricing up works in the city's Institute of Arts. Let's hope a little power and money, so evident in the art world, can save these works for the citizens of the beleaguered Motor City in 2014.