How to sound clever about Supreme’s Mike Kelley collection

Learn how Kelley worked childhood, craft and creepiness into the pieces Supreme is reproducing

Yet, just as you wouldn’t want to wear a Ramones t-shirt without being at least slightly familiar with a few of their songs, so you may want a brief primer on the Kelley works featured in this new collaboration, before buying a couple of items, when they drop into stores on Thursday 6 September. 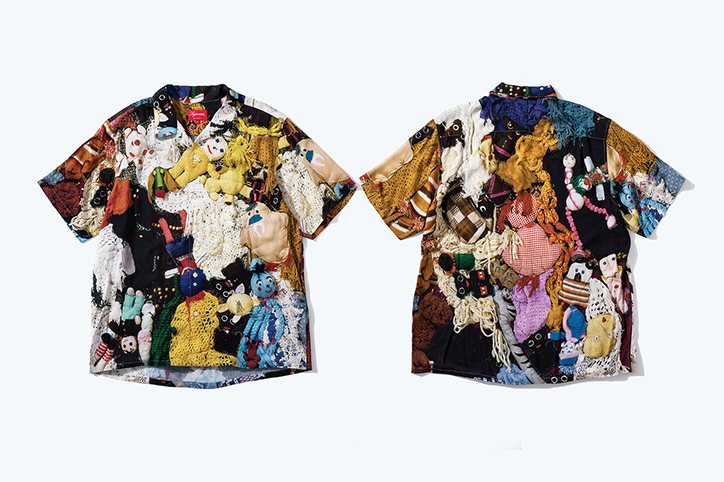 One of Supreme's new Mike Kelley pieces, featuring images taken from More Love Hours Than Can Ever Be Repaid (1987) by Mike Kelley

The shirt, above, features a photo of his work, More Love Hours Than Can Ever Be Repaid, a collage of soft toys, handmade craft items, and rugs, sewn onto canvas, by the artist in 1987.

Back then, Kelley took a strong interest in folksy, hand-made objects, buying stuffed toy animals and rugs at thrift shops and reusing them in his work.

As the art historian John C Welchman writes in our Mike Kelley book, the artist initially took up sewing “largely to snipe at his father’s desire for a manly son.”

However, there’s more to the work than simple family dynamics. As Welchman explains, Kelley’s interest in handmade items lies in the “enormous investments of time in their production and use,” and the kind of debt that places on a hand-sewn, cuddly toy’s recipient.

“The hidden burden of the gift is that it calls for payback, but the price is unspecified, repressed,” Kelley once explained. “The uncanny aura of the craft item is linked to time.” 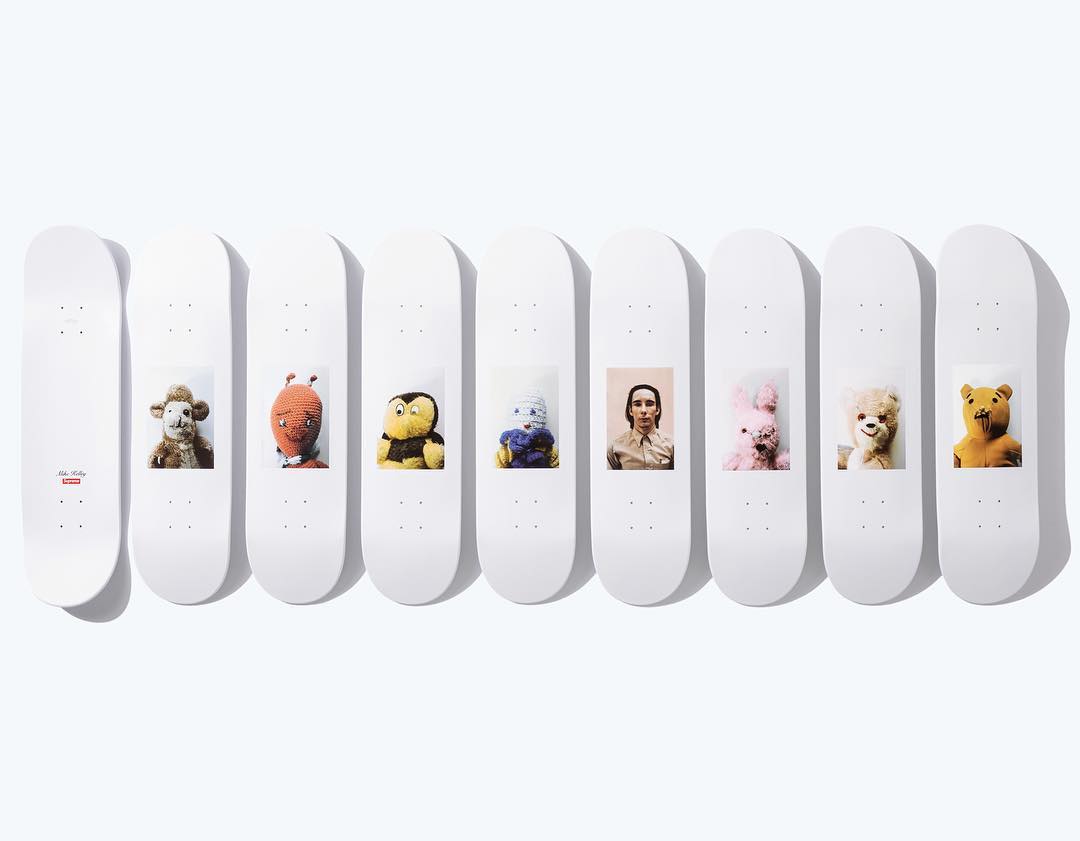 Yet More Love Hours Than Can Ever Be Repaid isn’t just a creepy way of looking at a cuddly gift. Kelley took a strong interest in contemporary art theory, and liked to compare the way lovingly made craft items acquired worth with the way contemporary art made from common-place junk came to be valued.

A work of contemporary art fashioned from urinals, bicycle wheels or unwanted toys “have value in spite of its material,” he once said, “while the craft item could be said, like an icon, to have value beyond its material.”

He pursued similar themes in his photos series, Ahh Youth!, from 1991, images of which featured on the cover of Sonic Youth's 1992 album, Dirty, and now appear on a number of other items in the Supreme collection. This work also featured old, worn soft toys, this time photographed as portraits, and accompanied by a fairly creepy head-and-shoulders shot of Kelley himself.

By placing his own face alongside these toys, Kelley makes the work more personal, and maybe a bit more sinister. 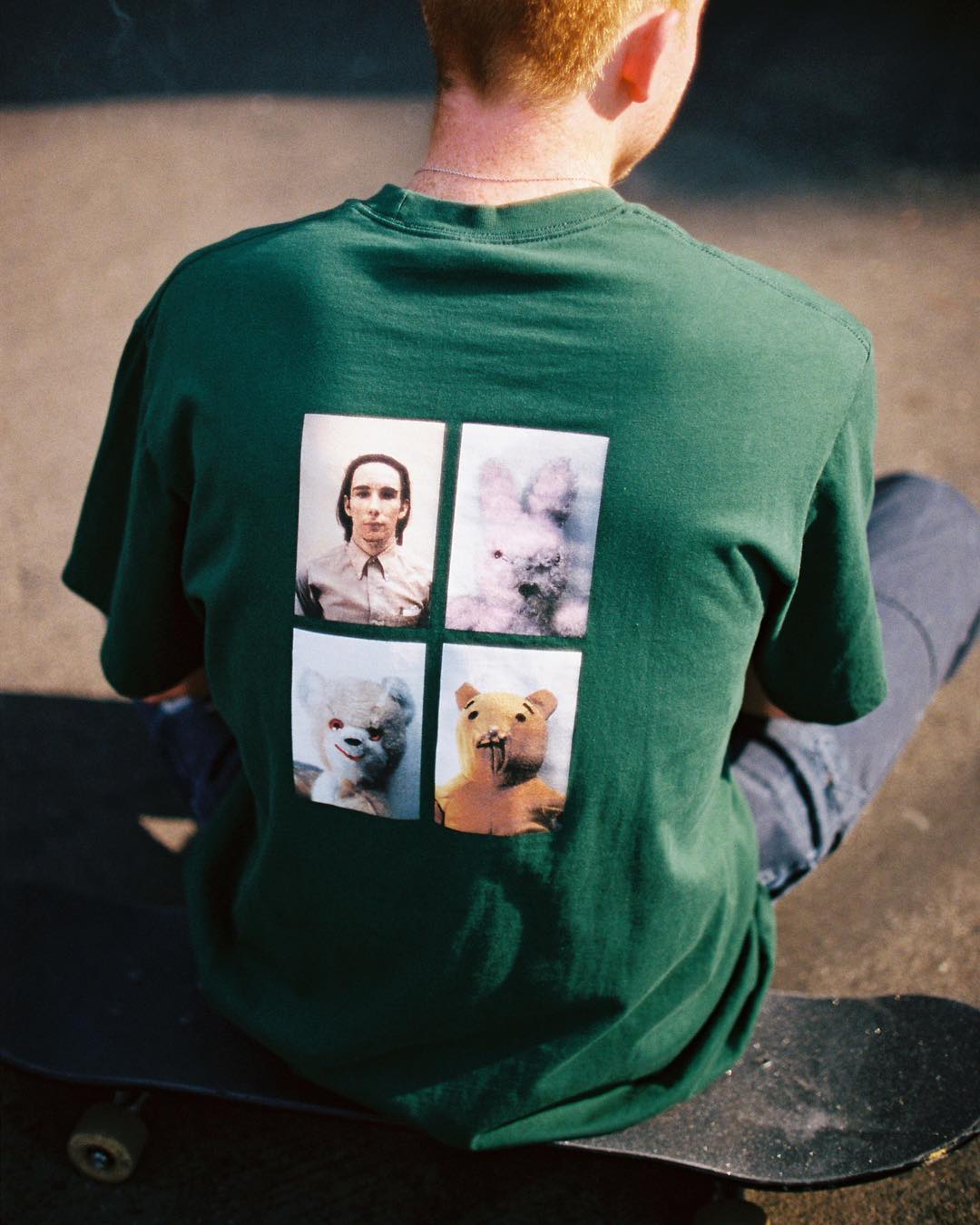 “Ralph Rugoff, for example, finds that ‘the figure of the pederast hovers closely around many of these works’” writes Welchman. “The soiled objects were read as residues of trauma and dysfunction precipitated by the release of Kelley’s repressed memories.”

Something to bear in mind, maybe, when you debut these garments at your local skate park. For more on Kelley’s place within the 21st century canon get The 21st Century Art Book; for a great overview of contemporary clothing, get The Anatomy of Fashion. And for Mike Kelley artworks head over to Artspace.