Larry Gagosian recently opened a Jean Nouvel-designed gallery right inside France's most important private airline hub, Le Bourget, just north of Paris, but from next month, Virgin Atlantic first-class passengers will be able to shop for paintings along with the more customary offerings from the in flight duty free service while in the air.

Virgin's “Gallery in the Air” exhibition will feature work by street artist Ben Eine, famous for being the artist whose Twenty First Century City work was presented to Barack Obama in the summer of 2010 during David Cameron's first visit to the US as prime minister.

The in air exhibition which runs from February 1-28 will feature 10 of the east London street artist's trademark typography-style works. Prices will range from £2,500 to £15,000. The new works will be on display in Virgin Atlantic’s London Heathrow, JFK and Newark Clubhouses and, once on board, Upper Class passengers will be able to take a virtual tour of the Gallery in the Air, view footage of the pieces being created and make their purchase. 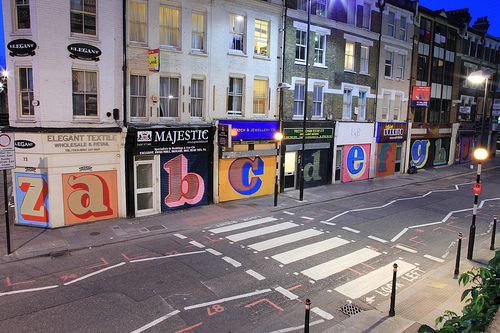 Phrases incorporated into the new Virgin paintings include: ‘Virgin on the Impossible’, ‘Great Adventure’, Man and his Machines’ and ‘New York Sauce’. He said: “We have created a completely original way of appreciating and buying art – a new frontier for the industry.” The collaboration is to be the first in a series of partnerships between the airline and well-known artists.