Claude and Francois-Xavier Lalanne get retrospective

Skye Sherwin on the French sculptors loved and collected by the likes of Tom Ford, Marc Jacobs and Valentino

The fabulous bronze beasts-come-furniture designed by Claude-Xavier Lalanne and her late husband Francois belong to a fairy tale world of decadent, luxurious whimsy. For some time they were the preserve of the most avant-garde of collectors but in recent years they've been taken to heart by the fashion pack, including the likes of Tom Ford, who has exhibited their work both in his flagship store in New York and Marc Jacobs, Valentino and NY architect Peter Marino who are all avid collectors. The patterns gracing Hervé Leger’s autumn collection are also inspired by Lalanne’s surrealist take on nature.

In the current capsule survey at Ben Brown Fine Arts in London (until September 21) featuring the French duo's output from the last five decades, every piece is alive with fanciful associations - you can imagine the Sun King appreciating this stuff. 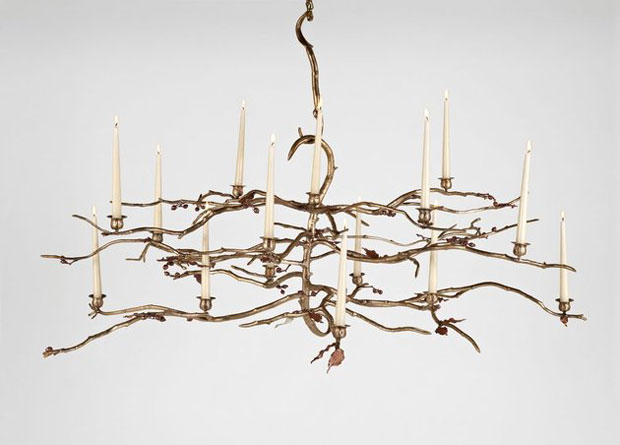 Francois-Xavier’s large rhinoceros whose metal hide opens to become a desk, or a gorilla concealing a safe, is the kind of thing no gazillionaire Bond villain should be without. Indeed, his smooth-skinned, round-edged creatures, have a geometric simplicity redolent of the 1960s-era when a revamped version of modernist design and the English super-spy were born. The rhino goes back to the couple’s very first Paris show of 1964.

So too a vast crinkly turquoise cabbage, which like the Russian witch Baba Yaga’s house, stands on chicken legs. Here it’s surrounded by a flock of literally woolly sheep, whose flat backs double as seats. The outsize vegetable with its flirty rococo folds and rivulets is typical of Claude’s work – using electro-plating techniques the couple worked side by side but not together on each piece, at their home in Ury, a village not far from Paris. 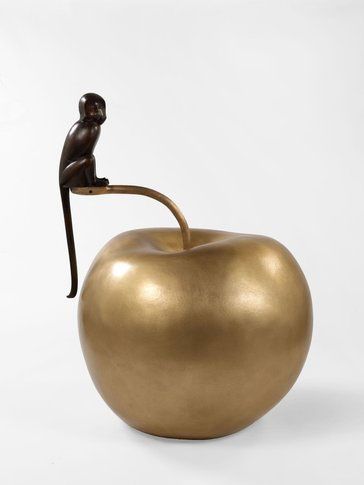 Her output is more intricate – a garden table made from a freeform lattice of snaking bronze vines conceals a monkey dangling between its legs; the fat leaves of a chair suggest the flora of Munchkin Land in the Wizard of Oz (the Technicolour version). Magical associations continue with one of Francois Xavier’s giant apples, the colour of berry-stained lips, juxtaposed with Claude’s mirror wreathed by gold vines.

You can easily imagine, if not Snow White, then Yves St Laurent and his guests staring at themselves in this enchanted glass. The designer commissioned a Lalanne room for his apartment, including mirrors and a bar. (In a bizarre bit of auction room inflation, the cocktail bar sold for €2.753 million in 2009, roughly €2.4 million above its estimate.)

Though chums with everyone from Brancusi, whom they watched at work as a young couple, to Magritte, Klein, and their neighbour, Duchamp, the Lalannes’ idiosyncratic surrealism occupies an uneasy place poised between art and expert craftsmanship and design. Perhaps what really distinguishes their output is its sense of humour. Who wouldn’t be seduced by the monkey, eyeballing gallery goers, while poised on the stem of a huge apple? His poker face seems designed to conceal, not animal mystery, but mischief.

If you're a fan of the Lalanne's work or if this story has opened your eyes to decorative arts, Phaidon has a number of books that you can take you further into that world. We recommend you take a look at the full range here but would like to point you towards Edmund deWaal's wonderful Pot Book for starters. 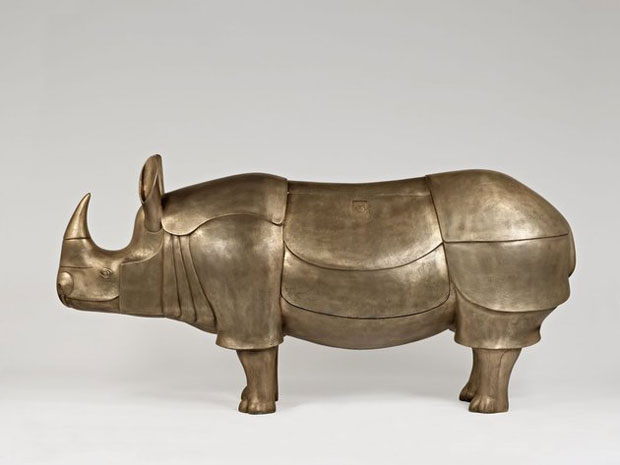