It was inspired by Robert Rauschenberg’s White Paintings (1951), so perhaps it is fitting that the earliest existing score to John Cage's silent composition, 4'33”, should end up in a visual arts institution. Earlier this month New York's Museum of Modern Art acquired the second ever paper rendering of 4'33”, a noteless work “for any instrument (or combination of instruments)”. The piece was sold by the composer's friend and fellow artist Irwin Kremen; as The New York Times reports, Cage gave Kremen 4'33” on June 5, 1953, for Mr. Kremen’s 28th birthday. 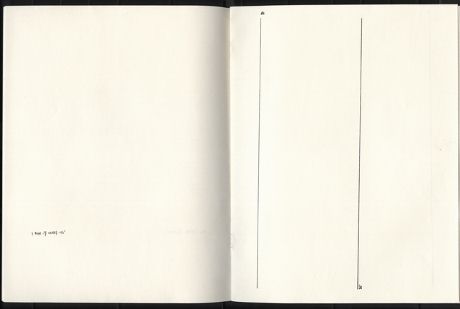 Cage's graphic rendering of the piece

These “three folded sheets of almost blank onionskin paper”, as The Times describes them, were not the first version Cage had outlined on paper. The avant-garde composer had written one earlier score, in conventional musical notation, which was lost prior to the piece's initial performance on 29 August 1952 in Woodstock, NY.

For this subsequent version, Cage drew a graphic interpretation of the score, with a simple line and spaces, accompanied by a key explaining that "1 page = 7 inches = 56 seconds."

As The Times reports, the piece was bought by the New York financier Henry R. Kravis, in tribute to his wife, Canadian economist Marie-Josée, who is also MoMA’s president. The museum has plans for a tightly focussed exhibition centred around the piece next summer.