Peter Blake's one was covered in a pop collage; Vivienne Westwood's carried a handwritten plea to “stop climate change”. Both high profile British creatives gave the British Phonographic Industry's annual awards ceremony a trophy which, while retaining the original award's Britannia statue, was very much in their own styles.

So, what will Damien Hirst do? The Brits committee have just announced that he will be designing the award for the 2013 shindig, to be hosted in London next February once again by the comic actor James Corden. 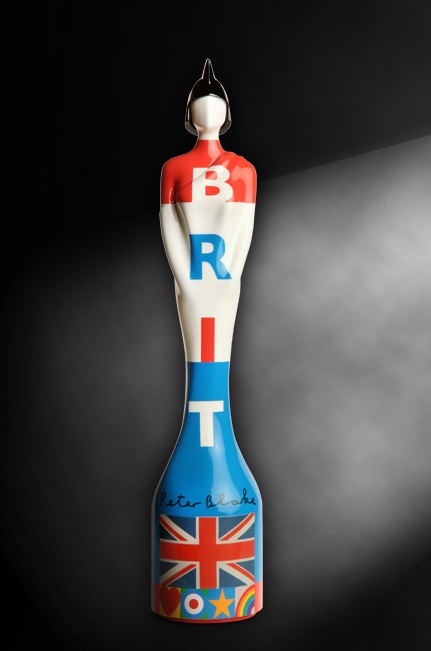 Brits chairman David Joseph says that the organisation "is delighted that Damien will become the third extraordinary creative Briton to re-imagine the Brit statue,” adding, “he is truly one of the most important British artists ever and his unique vision will make winning a 2013 Brit an even more special proposition.”

Hirst is, as you probably know, no stranger to the music industry; he co-founded the one off pop group Fat Les with actor Keith Allen and Blur bassist Alex James in 1998, directed the video for Blur's 1995 single Country House, has overseen all the artwork for British band The Hours, and produced a gigantic splatter painting for the London 2012 Games musical closing ceremony. Earlier this year, Tate Modern's Hirst retrospective became the most visited solo show and second-most visited exhibition in the gallery's history. Hirst had 463,087 visitors, while 467,166 went to 2002's Matisse and Picasso show.

Whether he goes with the splatter motif again, decorates the award in dots, or sticks the poor thing in a vitrine with some dead livestock remains unclear as yet. Given the sadly reduced state of British music however, it is, at least, one very good reason to tune in on February 20.