James Nares swings back in time

New Yorkers get a rare chance to see the early films of James Nares - the British artist who moved to Manhattan in the 70s and became part of the city's hip new wave of artists.

Nares' 1976 movies form part of a show that's just opened at the  Paul Kasmin Gallery. Nares' became infamous as part of New York's No Wave scene in the late Seventies, playing in bands such as The Contortions and living the life of a Tribeca (then a ghost town) loft artist to its fullest. He went on to become famous for his huge single brushstroke paintings in the 1980s. 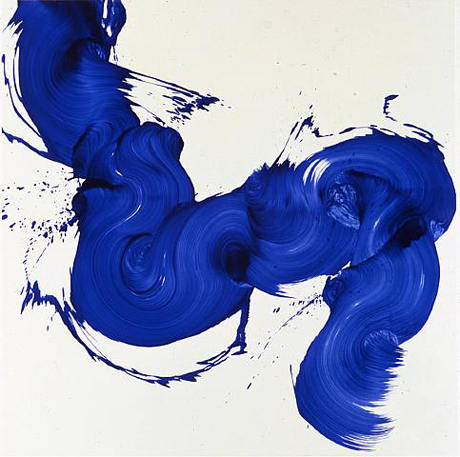 The Exhibition - 1976: Movies, Photographs and Related Works on Paper -  features five films including his 1976 Pendulum, which tracks a large spherical mass as it swings on a wire, strung up high on a footbridge (since dismantled) crossing Staple Street in downtown Manhattan. The exhibition also features a series of black and white chronophotographs that reveal the temporal structure of a pendulum's swing, invisible to the naked eye. Nares's films were influenced by those Richard Serra made in the late 1960s (primarily Hand Catching Lead) which focussed on the single repeated action involving the effect of gravity on a heavy metal object.

Commenting on his first impressions of New York Nares has said: "The physical environment was different. I loved the abandoned neighbourhoods and the loft living, you could just get a big loft in Tribeca for $200 a month and move in there with your friends and do whatever you felt like doing. There was a real sense of possibility then, which is curious because there was no money. In a way it was a creatively freer time. I was one of those people who wanted to do everything."

"The only thing that really survives from that period is my pendulum movies. I hung this enormous pendulum from the bridge on the street where I lived and made a movie just watching the pendulum swing. I also had cast these concrete balls and just left them in vacant lots or the middle of the street. They looked beautiful. It seems like a long time ago. It also seems like a kind of golden age, those years." 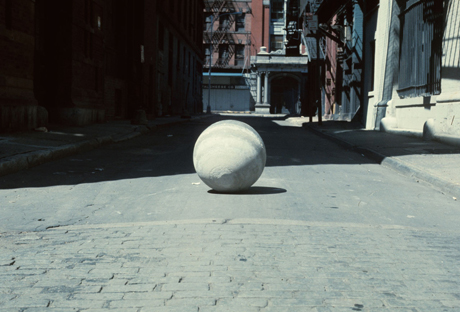 Nares went on to make his name in the early 80s by stripping out and discarding the parts of painting that weren't important to him. He was left with just the brushstrokes. "There always seemed to be enough happening within the movement of a brush to keep me interested. And the best way to interest other people is to interest yourself. I remember almost getting thrown out of the Uffizi Gallery on a trip to Florence for getting so excited about the way Rembrandt had painted the colour of his coat with one brush stroke!" 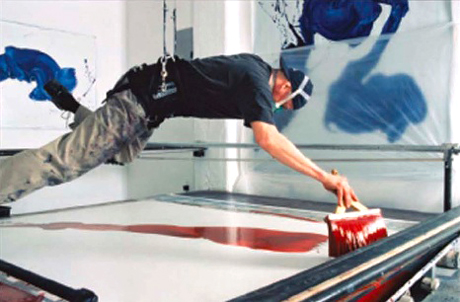 James Nares swings as a pendulum to paint his brushstroke canvases