Fujiwara was born to a Japanese father and English mother. He grew up with his mother and spent many of his formative years in the town of Carbis Bay in Cornwall. After studying architecture at the University of Cambridge he embarked on a fine art course at the Städelschule Hochschule fur Bildende Kunst in Frankfurt am Main from 2006 to 2008. He has lived and worked in Berlin ever since.

His current exhibition Since 1982 at Tate St Ives, (until May 7), is his largest and most ambitious yet and showcases specially commissioned pieces alongside important recent works. You can listen to Simon's Muse Music on Spotify. He has some fascinating things to say about the memories and people bound to his favourite songs and explains how they have influenced his art work.

"Music has always been most importantly for me, a storytelling vehicle. Some of the songs I’ve selected have inspired works I have made in their mixture of references and styles, the abruptness of the shifts in genre they encompass or an unashamedness to be vulgar or poppy. Other tracks are by friends of collaborators who I admire. Generally, all of my work begins with a script - even if it ends up being an installation or sculpture. When I write I don’t listen to music as I find it distracting, I like to be able to focus on music while I’m listening to it, without any other distractions. I studied classical music and was trained to become a concert pianist as a child (I had an Asian parent!) but I never made the grade."

Palais Schaumberg Wir Bauen Eine Neue Stadt _ - _I heard this song when I first came to Berlin to ‘start a new life’. Holger Hiller (the singer) was teaching my friend German when we first arrived together. I had just graduated from architecture school which was academic and often stifling, and this song encapsulated a sense of freedom, of anti-intelligentsia, that the idea of the city could provide. It was partly this track that inspired me to go to art school.

Tune Yards Gangsta _ - _Two words: controlled chaos. Mixing punk elements with Jazz syncopation – and a wild, androgynous voice, this is a song that makes me stop work and listen every time it comes on. It’s a song that somehow manages to be intelligent and playful without being cynical or knowing. And is also kind of ugly.

Anna von Hausswolff The Book__ - In an installation I’ve made at the Tate St Ives, titled _Mothers of Invention_, I created a Frankenstein-inspired female atelier-come-horror studio. I like this cliché that gay men are often attracted to hysterical or diva-like women, and I’ve been listening to Anna von Hausswolff on repeat in the process. Her lyrics are so over the top, so melodramatic and Scandinavian, I can’t help thinking of Ingmar Bergman’s Autumn Sonata, which I think of as a comedy - I cry with laughter the more cruel the characters become. Anna is the sister of one of my best friends and collaborators, Maria whose short stories are performed with Anna’s music. 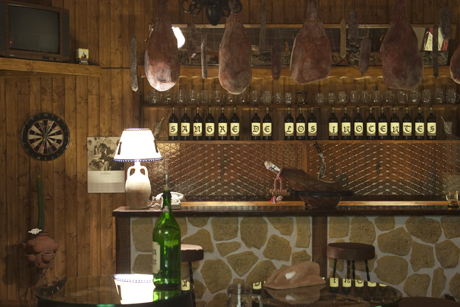 Kanye West All Of The Lights - This is a song that I play when I get stuck in a rut in the studio, bored and out of ideas. I wait till I’m alone and play this full blast and literally clean the studio floor. Nothing happens in my brain, it just happens in my body. I’ve gone through a number of pairs of jeans because of this track.

Fleet Foxes ___ The Shrine/An Argument__ _ - I was listening to this song when I was in Japan, reuniting with my family after a number of years, last summer. I love songs that shift totally halfway through. It has an urgent feel with the guitars at the opening of the track - a story is being told - before it totally explodes into a sort of stomping Western film soundtrack. Then it shifts again into a bizarre, floaty, jazzy world. It’s a song that takes you on a total journey and they are not afraid to mix references, or kill their darlings. You settle into one section of the track that is beautiful and melodic and then you are ripped away quickly. It’s like watching a Tarantino film. 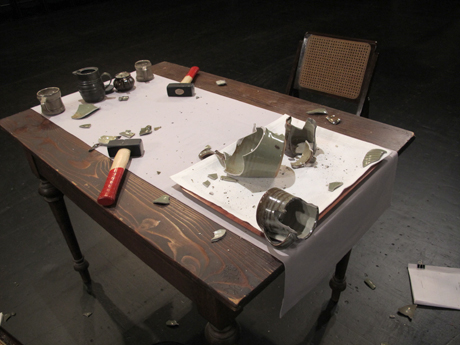 Simon Fujiwara, Rehearsal for a Reunion (with the Father of Pottery) (2011), HD video, colour, sound, 14 min 25 sec, Courtesy the artist

_Ayumi Hamasaki Brilliante _ - One of my oldest friends, Tim Wellard, wrote this song for Japanese pop diva (Ayumi) Hamasaki who I listened to in my early teens while visiting Japan. Tim is an inspiring figure in my life - a former English teacher, choral scholar, actor in a costume drama and drag diva, he has lived many lives in Japan and is a complex creation of his own. This song mixes Gregorian chanting with sugary J-pop and a homoerotic video. The way the Japanese pick and choose historic periods, trends, and employ costuming in their daily lives is an inspiration for a show I am doing next year in a 5th Century Shinto shrine in Kyushu.

Azealia Banks 212 ft.Lazy Jay__ - Here’s another song that flips halfway through to another thing entirely. This song presents a world that is so entirely exotic to me, I just listen to it like I’m watching a bizarre documentary.

Schubert Der Doppelganger - I studied this piece of music as a student in school, and it has stayed with me ever since. It was the first time I realised how beautiful the German language was, and how such complex things can be told with such few words. A poem set to music, it tells the story of a man who sees his Doppelganger, a foreboding symbol of his death. Many of my works feature a central male character, often ageing, who has to confront his own life. This song was particularly inspiring for the work I made called “The Personal Effects Of Theo Grünberg” the story of a 136-year-old German librarian who was obsessed with poetry and whose identity mirrored the history of Modern Germany. 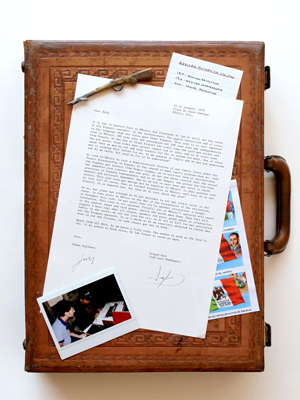 Simon Fujiwara, Letter from Mexico (Briefcase) (2010), Courtesy of the artist

The Police Bring On The Night__ _ - _I don’t do reggae - something in my body just refuses it - but The Police somehow manage to bring reggae influences into my audio zone and this song, for me, is one of their best. It’s so yearnful and melancholic, a perfect moody soul-searching track, which still brings out the teen in me today too.  I like The Police because they are so unashamedly emotional. But there are many ideas in the songs – sometimes too many – so that not all are as successful as each other. This function of emotion is something I am increasingly interested in in my work and performances.

Stromae ___ Alors On Danse__ _ - Fond memories of a darkroom in Nice, France. A very personal thanks for this song.