Even among the sheer mass of Olympics-related architecture opening everyday in London at the moment, it's hard not to be impressed by Coca-Cola's Beatbox - a project featuring the talents of super-producer Mark Ronson and young London-based architects Pernilla & Asif. The structure, in London 2012's Olympic Park, is covered in 230 aluminium-framed and inflated ETFE plastic 'pillows' that, when moved or touched, will emit pre-recorded sound-bytes from Ronson's Olympic music project. Visitors will then be able to create their own beats by remixing these sounds. 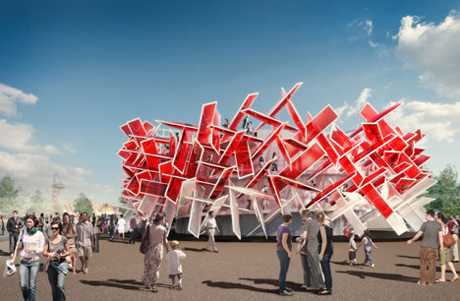 The commission is part of the Future Flames campaign, which seeks to celebrate and reward the best of British youth and is part of the brand’s wider Move to the Beat advertising campaign, for which Ronson travelled the world recording the sounds of athletes in training.

"I like a challenge and this was it," Adele and Amy Winehouse producer Ronson says. "This is the city I was born and live in. It's a huge responsibility. The point was to make it (the music) feel like part of London and the Olympics without saying, 'Oh we're winning and we're going to get the gold.' Obviously there was the Cool Britannia thing and it is still that era but you don't need me to say that."

The architects, Swedish-born Pernilla Ohrstedt and British-born Asif Khan, said: "We decided to try and find the architectural analogue for this: a building which you can hear and play, like an instrument, and has it's own beat. Hence the ‘beatbox’."

The sheer amount of planning that went into the building belies its almost quirky, seemingly ephemeral nature. "The building needed to meet stringent sustainability guidelines, follow complex planning requirements and also be able to go from concept design to completion in one year," the architects told Wallpaper*. "It needed to have a legacy strategy to repurpose the structure after the games and also an ability to have a presence beyond the Olympic Park itself, which meant a way for the global audience watching the Olympics to experience and interact with the building through social networking and live streaming."