It's Friday again and time for another Phaidon Muse Music. This week we tracked down one of our favourite artists, George Condo, and asked him to put together a playlist of the music that's inspired his art over the years.

Painter and sculptor George applies the techniques of the old masters to the grinning, shrunken-headed characters that inhabit his canvasses. He takes inspiration from American caricature, old European portraits and Greek Mythology. In the early 90s he began referring to his subjects as 'pod people' after the antipodal beings in Aldous Huxley's Doors Of Perception. Their pyschological cubist forms are scary, surreal yet, in their own way, rather beautiful. Ralph Rugoff, curator of Mental States Condo's current UK show at the Hayward Gallery says he has an incredible sense of humour.

"He's always coming up with funny ideas. His brain is always percolating. A very creative thinker. The conceptual side of George is sometimes him playing with what the status of what a work of art is. Whether it's by making a fake of an old master or simulated antiquity like the fake gold heads in the Haywary show.  It's like a delinquent version of classical Greece!"

We've put George's playlist on Spotify but before you listen to it take a read of what he says about how they inspire him in his work.

"Music is such a huge part of my life, without it I don’t know if I'd ever have painted anything. There are so many great pieces of music that have inspired me to paint that it’s quite difficult to narrow it down to just 10. My favourite thing is to put on a record in the studio and to still be painting without noticing the fact that the music has stopped playing for hours and is just running through my head. Here is a selection of masterpieces which in my opinion should inspire any artist to want to make art."

__Miles Davis  _Round Midnight - ___ Miles' rendition of Monk's classic ‘Round Midnight has one of the most breathtaking harmonic arrangements I've ever heard using only two instruments.  Just before the break leading into Coltrane’s solo they capture the sound of a 40-piece big band.  That shows you the kind of dynamics you can achieve with just two colours when they're the right ones.

__Miles Davis _Blue And Green - ___ Bill Evans is one of my all time favourite pianists.  His sublime impressionistic harmonies compliment Miles' trumpet so beautifully.  Listen closely to the drums throughout the song, which sound like rain falling.  That's the kind of effect I'm after when painting the backgrounds of many of my portraits.

__Jimi Hendrix _Hear My Train A Comin’ - ___ Basically everything he ever did is worth hearing 10 times.  I highly recommend the live performances with extended solo improvisations, such as Hear My Train, originally released on the Rainbow Bridge album. Throughout my entire career I've aspired to be as good a painter as he was a guitar player. 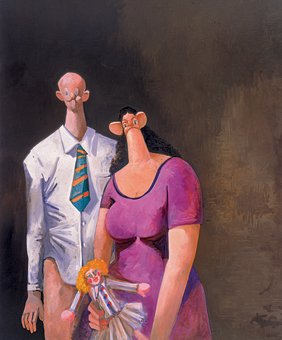 __Kanye West _POWER - ___ This is without a doubt my favourite piece of music written in the last 10 years.  It propelled me into a schizophrenic, abstract mode of thinking which fit nicely with the kind of paintings I was working on.

__Alfred Deller _I Saw My Lady Weep (John Dowland) - ___ One of the most beautiful and melancholic songs ever written. I’ve listened to it so many times, I can’t even remember how many.  And I’ve strived to paint that expression on every female face in each of my portraits.

__Hopkinson Smith Piéces de Luth du Vieux Gaultier, Suite En D.LA. Re Mineur: _Tombeau De Mezangeau - ___ Hopkinson Smith's recording of this French 18th century lute music provides endless sources of light and shadow.  There is a kind of fragmented ornamentation which unfolds that inspires me and I’ve listened to it over and over again while I paint.

__Pablo Casals Johann Sebastian Bach _Cello Suite No. 2 in D Minor: Sarabande - ___ Whenever I hear this piece I think of Rembrandt's Philosopher in Meditation that hangs in the Louvre, a portrait of a man with his head glowing in sunlight under a spiral staircase leading to infinity.  The profound sadness that is evoked in the chordal harmony has always been an inspiration.

__Budapest String Quartet Claude Debussy _String Quartet in D Minor, Opus 10: 3rd Movement - ___ A particularly beautiful dialogue happens between all four of the instruments.  I have painted many paintings involving multiple characters and think of those conversations between the instruments in the same way that I think of the potential conversations between the characters in my paintings.

__John Lennon _Isolation - ___ I work alone on my paintings without assistants and this song captures the inner dialogue often running through my mind as I'm flipping in and out of emotional turmoil.

__David Bowie _Space Oddity - ___ I have always related to Major Tom, floating in his tin can.  Especially when it’s full of turpentine and varnish! 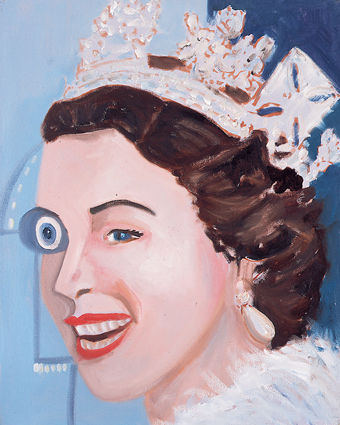