Did you spot JR at the Charlie Hebdo march?

JR, the French-born artist and activist, maintains his anonymity by wearing a pair of sunglasses in all photographs. However, when it comes to his art works, JR often reduces his portraits down to the very facial features he himself chooses to obscure.

He’s pasted eye-strip portraits onto Brazilian favelas, the avenues of Phnom Penh and on the facades of New Delhi. However, a very effective example of this technique was put on show in JR's hometown, when crowds took to the boulevards of Paris for last Sunday’s march. The demonstration, a show of international solidary following the Charlie Hebdo murders, saw JR and his studio reproduce a black-and-white image of the eyes of Stéphane Charbonnier, better known as Charb, the slain cartoonist and editor of the French satirical magazine.

JR’s image was printed off across eight placards, which were held aloft by marchers; JR also produced similar, smaller eye-strip placards of the other twelve contributors murdered last week. 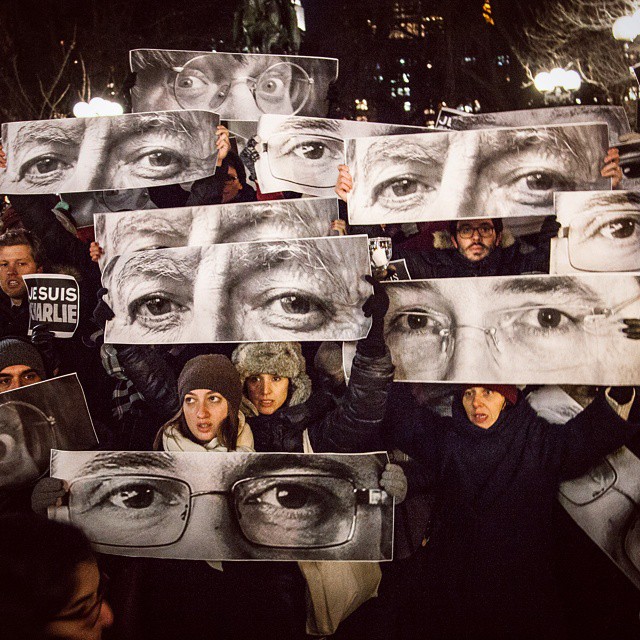 JR, who, according to his Instagram account is currently in Egypt, might have expected his work to reach beyond the physical limits of last weekend’s march, yet even he must he been flattered and surprised to see a shot of his placards make the cover of Monday’s edition of the New York Times.

Charb’s posthumous appearance in the US paper of record feels like a fitting tribute, given a poignant touch by the fact that it was another French artist who put him there. Find out more about this on JR’s site, and check back soon for news of a comprehensive JR monograph coming from Phaidon later this year.