The story behind those Armory Show teeshirts

The Armory Show which opens today (and celebrates its centenary) was the show that presented ground-breaking work by Cézanne, Kandinsky, Matisse and Picasso (all well represented in the Phaidon canon) on its maiden 1913 opening. Doubtless this year's show, at Piers 92 and 94 (711 12th Avenue), New York, until Sunday (10) will have a defining impact on the careers of many of the artists exhibiting within it. We wish good luck to all of them.

Visitors will doubtless notice however, and perhaps be intrigued by, the designs emblazoned across the teeshirts of the staff working the event. Designed by Liz Magic Laser, who's responsible for the visual identity of this year's Armory Show,  they state, among other salient facts,  the average household income of visitors - $334,000 apparently. Shoulder bags on sale in the shop meanwhile state the cost of a  booth - $24,000. 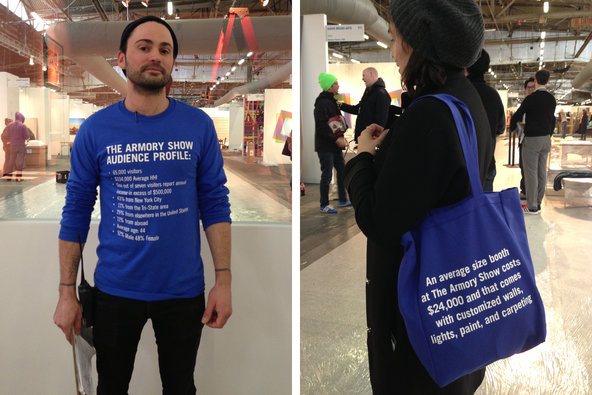 The story behind the shirts is a fascinating one.  Last November Laser assembled focus groups to propose ideas around what she should contribute as the commissioned artist for The Armory Show. Laser sat behind a two way mirror observing the responses of various art world figures who chipped in with their ideas.

“It felt like watching my own funeral,” said Laser, who listened silently as the art-world pros pored over her previous work. However, she admitted to enjoying the reversal of the artist/ viewer relationship in which she became a passive spectator. Art In America magazine carried a really interesting report from the evening which you can read here. And if you're attending the show today, enjoy.