It speaks volumes that American artist Cy Twombly died not in his native New York but in Rome. That one of the greatest painters of the second half of the 20th century should have moved from the centre of the art world to immerse himself in the Mediterranean culture of a European capital is telling of both his work and approach to life and all its inspirations.

While never quite rejecting his past Twombly immersed himself in the culture of a society that offered the freedom and liberal lifestyle conservative America never could. In later years his dealer, Larry Gagosian, would open a gallery in the Italian capital, purely because Twombly was there.

Twombly’s work sold for millions and, though often difficult to understand, inspired fevered devotion once it took hold in the viewer. In 2007 a woman was arrested after kissing a white canvas he’d painted. (The lipstick could not be removed and she was ordered to pay compensation).

Born Edwin Parker Twombly in 1928 – he took the Cy from his father’s nickname, Cyclone – one of his earliest and most formative experiences was his service as a cryptologist in the US army. Stints at art colleges in the US followed where he further developed his style.

Twombly changed the perception of painting as a traditional high medium using oil by introducing drawing – often considered a lesser art form - to it. Although a contemporary art figure, he was an artist who looked to the past. A literary figure, part of his inspiration came from myths and traditional stories. His work influenced the neo expressionists and had an emotional impact that, like Rothko’s, could be experienced equally within mere seconds or over the course of repeated viewings.

Key to this was the works’ scale, drama and the physicality with which he applied his paint. Huge impressive brush strokes combine with delicate pencil lines and whole layers of subtle detail reveal themselves the longer the viewer engages with the work. His scribble like paintings were made using house paint and wax crayons. 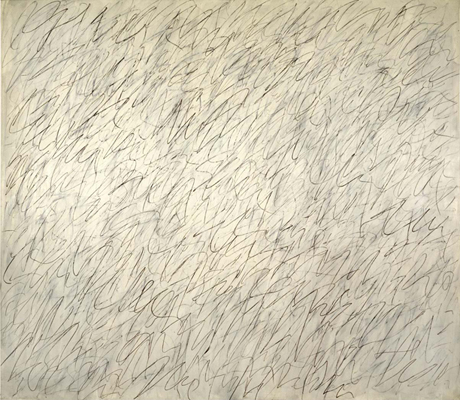 The paintings were a personal diary of his obsessions, both intimate and universal, taking in the experiences of his own life (Nini’s Paintings, Ferragosto) and grand scale subjects as reflected in The Four Seasons and Nine Discourses On Commodus.

David Anfam, art historian, critic and curator, told Phaidon: “He went beyond abstract expressionism and evolved a fresh kind of history painting which, although based on the freewheeling gesturalism of Pollock and others led into new territory. The result was a kind of mostly illegible script, often on a vast scale and crammed with myriad allusions to the past as well as contemporary life. Twombly re-introduced to painting and sculpture classical subject matter, lending it a very idiosyncratic air of fin de siècle sensuality. Themes of love, death and the carnivalesque abound – in spirit, it is an art deeply rooted in Mediterranean culture.”

Stylistically, and in terms of content, Twombly’s art was too singular to have one-to-one influences on other artists though he did influence and inspire the autobiographical and confessional trend for content – a trend still alive in the work of, say, Tracey Emin and Marlene Dumas. His obsession with mortality and corporeality meanwhile live on in the work of Damien Hirst and Luc Tuymans.

Above all, he and his close friend Robert Rauschenberg marked out their distance from abstract expressionist absolutes by seeking to bridge the gap between art and life. As Anfam says: “We have lost an artist who created some of the most challenging quasi-abstractions of the post-war period.”