Beast And The Sovereign artist works on new paintings on Lamu, scene of a kidnap and gun battle

Secluded on the Kenyan island of Lamu - the location of the kidnapping of a disabled French woman in October - British artist Wolfe von Lenkiewicz gives a long-distance interview to Phaidon about the work he is creating there, and about his previous body of work The Beast And The Sovereign, most recently displayed at Galerie Michael Haas, Berlin.

Lenkiewicz’s signature style is a blending of recognisable aesthetics such as religious figures, pop-culture icons, literary characters and motifs from some of the world’s most famous paintings.  In the past, this has included everything from Walt Disney cartoons to Da Vinci’s _Lamia. _Now he is drawing on a surprising array of inspiration sources that include Pokémon and 16th Century Dutch painter Hieronymos Bosch - another artist whose work is saturated with symbolism.

What are you doing in Africa?

I have been given a residency on the Kenyan archipelago island of Lamu. Once a year, in order to concentrate on my work without distraction, I find it necessary to escape London. In this particular instance the timing is somewhat risky due to the very real possibility of attacks from Al Shabaab militants. My studio directly faces the former residence of the kidnapped woman and there are American war ships patrolling the channel, protecting the island. There is a Somali guard at the entrance 24 hours-a-day. 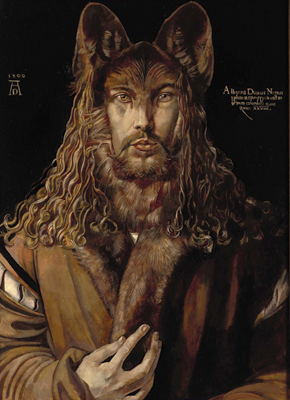 Is the sense of danger impacting on your work?

The sense of unease is having a strange effect on the body of work that I am making here. The theme of my next exhibition is the contrasting subjects of paradise and hell delineated by the 16th century artist Hieronymos Bosch. There is a sense of imminent danger that traverses through the triptych from the panel Hell to the central panel Paradise, as if paradise is not immune to danger. The borders of the frame separating one frame from another do not guarantee absolute safety to the inhabitants. In this way hell can be all pervasive - even in paradise.

External to my studio is a very beautiful garden filled with iridescently coloured horn-billed birds and the sound of flowing water. This garden is the real extension of the painting. Often, while walking in this garden infested with pythons that make their way from the dunes, I can see its parallel with Eden. One may easily imagine, as with Van Eyck's Ghent Altar Piece, the majestic appearance of a bishop wearing his bejewelled mitre hat. The faceted mixture of gemstones and berries are cushioned amidst the green foliage, acacias and palms. Further to this painting I am composing a 60 minute musical score that will be played at the opening. 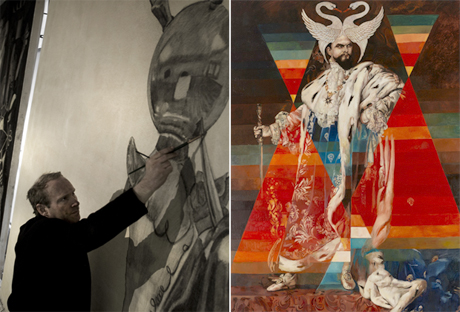 Portrait of the artist Wolfe von Lenkiewicz (left) and his work King Ludvig/Kleen (2011) (right), Oil on canvas, 272 x 192 cm (from his exhibition The Beast and the Sovereign)

What sort of work have you found yourself creating?

Sometimes the work is inspired by a lateral observation stemming from the original source such as the pink mountains that are half organism and half mineral in Bosch’s painting. These mountains have clear crystal cylinders protruding from them. If the gentle wind in paradise were to blow against these glass tubes an Aeolian music could result. I am composing music for these structures and likewise reorganising the elements of the structure itself for the music.

Which characters are appearing?

A great many characters such as figures from Pokémon, Hokusai and Braque have invaded the ramparts of the heavenly garden.

__The Descent of Man was monochrome and sepia. Then, for I Have An Excellent Idea Let’s Change The Subject, the colours were almost psychedelic. __The Beast and The Sovereign had an altogether new treatment of colour, somewhat more refined and traditional. What were your influences during this period?

In some ways The Beast and the Sovereign does cross over with the intensity of colour found in the previous exhibition of I Have An Excellent Idea Let’s Change The Subject. The painting _King Ludwig II of Bavaria _depicts the swan king teleported through a schizophrenic time dimension of intense Newtonian spectrums whereas Arnold Bocklin’s _Island of the Dead _maintains a monochromatic colour scheme in keeping with its theme. The exhibition was painted not far from Eichmann’s headquarters on the colourless grey streets of Berlin. The ashen grey of the holocaust camps muted my palette. 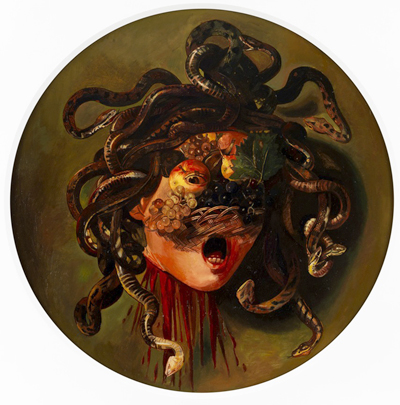 You use recognisable motifs and symbols taken from elsewhere. To what end is this employed in The Beast And The Sovereign?

_The Beast and the Sovereign _develops a series of paintings divided into three motifs: one, appropriation and the question of author as origin; two, the criticism of fundamental foundations in art and language; and three, the crystallising of this into the theme of the sovereign and the beast. These three motifs position themselves within the subject of Germania. This subject, drawn out of Germany’s potent historical geographical space and place, may act as an illustration of these motifs, however, not the only expression of them. Central to the subject of Germania is the acceptance of fundamental core beliefs and foundations. It was the purpose of the exhibition to explore a circuitous route around these undefined borders, concluding only with more questions. 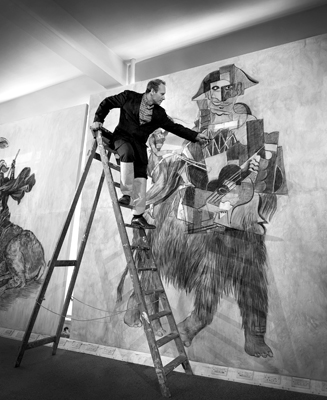 Wolfe von Lenkiewicz at work in his studio