From ancient to modern times, art has survived and thrived in public spaces, beyond the bounds of private dealers and galleries, often on a monumental scale. Art & Place is a celebration of some of the most outstanding examples of site-specific art in the Americas. Not only does such art raise the spirits (not merely because it's generally free of charge) but it tells us much about the culture and history of the Americas themselves, and their relationship with the arts.

Take, for example, the AXA Equitable Building in New York, among the 500-plus artworks contained in these pages, which features in its outdoor spaces a range of works from Sol LeWitt, Roy Lichtenstein and Scott Burton, all commissioned in the 1980s. Lichtenstein's Mural With Blue Brushstroke is five storeys tall, and references not only his earliest, most well-known work but in its colorful collage pays homage to his artistic forbears and influences, including Fernard Léger, Jackson Pollock and Henri Matisse. 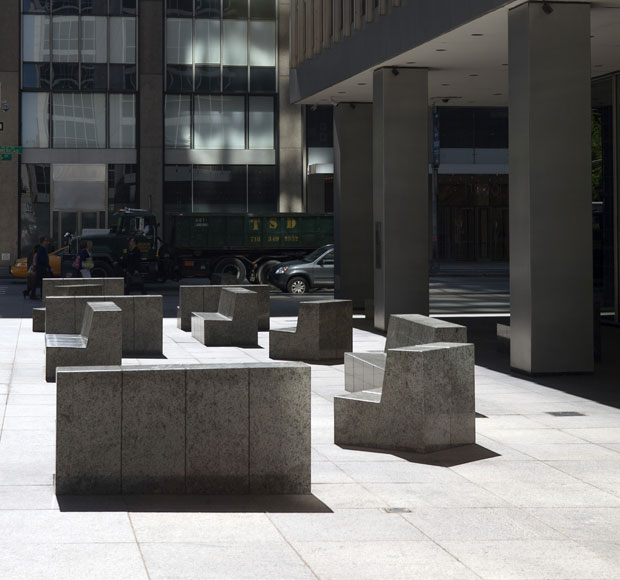 This can be viewed from a gathering place within the building's atrium designed by Scott Burton, who also designed functional seating groups which are available to workers and tourists alike. Meanwhile, outdoors, in a covered galleria joining 51st and 52nd street between Sixth and Seventh Avenues can be found Sol LeWitt's self-descriptive Wall Drawing: Bands Of Lines In Four Colors And Four Directions, Separated By Gray Bands, which consciously echoes the grid layout of midtown Manhattan.

These works were commissioned to mark the opening of the office tower designed by Edward Larrabee Barnes, unveiled in 1986. However, in offering such support for contemporary art and design, AXA Equitable Life Insurance wished to project a positive image of itself to New Yorkers – as progressive, leading edge and civic-minded, as demonstrated by this indisputable gift to the city.

Intrigued to learn more about this and other works? Then allow our editor, Rosie Pickles to introduce you to the title. You can also browse through a selection of images, here, or simply buy a copy of the book, from the people who made it, here.