Artists clown around in LA mansion

The ordinarily silent halls of Los Angeles’ Greystone Mansion were filled with music and the sounds of revellers on Saturday night. The Ball of Artists marked the end of the ten-day Pacific Standard Time Performance and Public Art Festival, the live component of the Getty’s Pacific Standard Time project.

In contrast to the retrospective focus of the Getty’s scholarly, historic endeavour, The Ball of Artists was packed with the art and artists of present-day LA. Around 20 artists were invited by organizers LAX ART to make works specifically for the event. Their brief was more complex, however, than simply to produce art for a party; the hillside mansion is notorious as the site of a tragic murder-suicide, and also as a set for myriad movies and TV shows.

The Greystone Mansion was built in 1928 by the son of the oil tycoon Edward Doheny. Ned Jr only lived there for four months, however, before he was shot in his bedroom by a mentally-ill manservant. The servant immediately took his own life too. Remarkably, Ned’s wife remarried three years later and continued to live there, but since 1965 the mansion has been owned by the city of Beverly Hills, earning its keep through location fees. The Social Network, There Will Be Blood, _Spiderman III _and The Big Lebowski all had memorable scenes shot there.

Inevitably, many artists chose to tackle this history directly. Artist and film maker Drew Heitzler stitched together scenes from film noirs based on the scandal. Film and installation artist Kerry Tribe made a film, _There Will be ___________, recreating the events of that fateful night in 1929 entirely through dialogue taken from movies shot there subsequently. 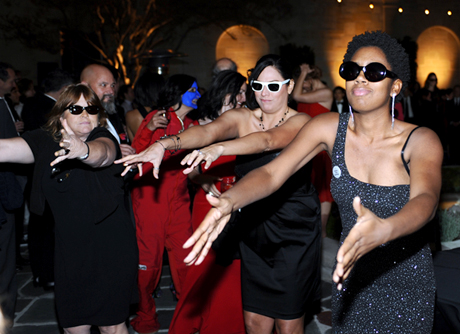 Nearby, Morgan Fisher’s stunning film projection _Color Balance _(from 1980, one of the few existing works included) reflected more obliquely on the vagaries of cinematic fiction. Wandering red, green and blue circles of light (from three separate projectors) intermittently meshed to create momentary ellipses of near-perfect white. The Murder, another historic piece by the late Jack Goldstein only ever performed once before in 1977, was perfect for the setting: in the courtyard, a red spotlight pinned an upstairs window, while an orchestra struck up expectantly. No one appeared.

For many artists, performance seemed the most fitting way to contribute to the occasion. Alex Israel hired a flash mob (all wearing his signature Freeway shades) to convene around the fountain and dance to Corey Hart’s I Wear My Sunglasses at Night. In the kitchen, Kathryn Andrews had contracted clowns to spin – and intermittently smash – a stack of a thousand plates.

Despite all the noise and brouhaha, some of the finest works were silent: Emilie Halpern’s phosphorescent chrysanthemums (Haunted Bouquet); Julian Hoeber’s lamps flashing Morse code from the terrace (answered by a lamp on a rooftop in the city below); Jedediah Caesar and Flora Wiegmann’s Dance Serpentine, which emulated the dance filmed by the Lumiere brothers in 1896. In instance, Alex Weir was the dancer. 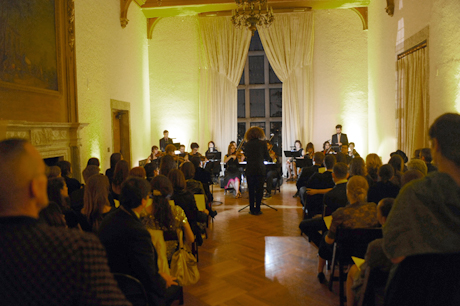 Surpassing all these, however, was Mungo Thomson’s Crickets. A chamber orchestra of violins, flutes and percussion uncannily mimicked the sounds of crickets from around the world. If, for a moment, one could quiet the sense of missing another performance somewhere else down the hall, and block out the thud of bass from the disco outside, the performance provided a moment of restraint in a night of visual and auditory exuberance.