Roger Hiorns to bury Airbus under the UK

With the excitement of the Turner Prize over for another year we began wondering about what happens to former prize nominees once the noise dies down. Well, 2009 nominee Roger Hiorns seems to be doing very well. We bumped into him recently and asked him about his plans to bury a 747 underground next year.

“The piece itself will be a very immaterial one,” he told us. “You won’t actually see it from the surface of the world. It all belongs under the ground and the access to the aircraft will be through a stairwell down into it. I’m taking something that has a sense of the world – a symbol of globalisation and rendering it completely immobile.”

Hiorns says there were two main angles of thinking behind the initial idea. Firstly, it’s a technological ending to a thought process started by American artist Robert Smithson in the 1960s with his Earthworks pieces in which landscape and work of art were inextricably linked.

“The idea is that people can find themselves buried 50 metres underground in this rather uncanny scenario. The plane itself will become almost like a long barrow (Neolithic tomb). It would be a technological reflection of the west Kennet or the Solsbury Hill earthworks. So in a way it has a connection with this country in terms of space that already exists.” 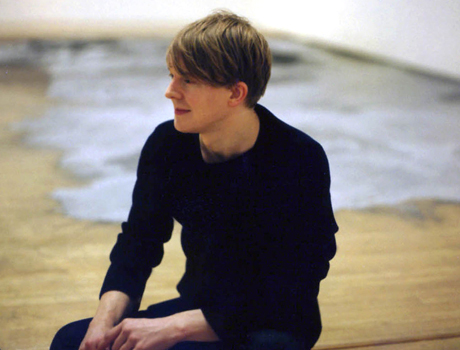 The other angle has a more spiritual dimension to it. When Hiorns crystallised an entire apartment in a rundown, brutalist architecture block in Poplar, South London in 2009 in a work called Seizure, he was intrigued to find that many visitors to the space came to meditate.

“These people were using Seizure, this artificial, completely built environment, like it was a sort of heavyweight piece of nature they could find themselves being overwhelmed by,” he says. “I found that very interesting. It’s not a conversation you have much in the art world these days! So I wanted to take this idea a little further so that people could inhabit this space that they could inhabit it in same way that we inhabit an aircraft, which is to face the same way for 9 or 12 hours, but to render that completely static under the ground and then see how behaviour could grow from that.

“I think part of my work is always interested in trying to understand how people are supposed to behave in the world. I think it’s interesting to change people’s environments to such a degree that the behaviour of people changes. To break those senses of direction is part of the choreography of life somehow. You can actually suggest a different route, a different passage and place. And so yes this buried aircraft can be an alternative version of a non-ideological church in a sense.

"You excavate what you need, the aircraft has to be taken apart and then moved to the site. Then it’s welded back together in the hole itself. If you want it to last you would put a concrete scrim on the outside or maybe a lintel over it to stop it being crushed.”

Hiorns is keen to point out the piece is not art as entertainment, more a study in psychology. “I think in a way there’s a lot of art as entertainment at the moment and when you embark on a big project it can be difficult to translate that. But this is not a spectacle in terms of the old-fashioned sense. It doesn’t allow you a visual experience. And in a way I disagree with flying, I disagree with it psychologically. It started out as being fearful, but because I have to fly I have to take sedatives so it’s me doing away with an object that I feel is not doing me any good. It's not entirely clear what degree of 'alive' we are, as we continue to fly, it's certainly a suspension of being. But I think it’s important to take on a stand on something. I think it’s interesting as a completely irrational response to something I dislike.”

It's not the first time Hiorns has worked with aeroplanes. In 2010 he was commissioned for a site-specific project on the Bluhm Family Terrace wing of the Art Institute of Chicago. The piece comprised two Pratt and Whitney engines, once mounted on a Looking Glass surveillance plane. That piece has now been acquired by the Arts Council Collection and has just been installed outside the Scottish National Gallery of Modern Art where it will be part of 'The Sculpture Show'. You can see him talking about that work in the video below.

Follow the link to find out which tracks Roger Hiorns chose for his Muse Music playlist, which you can listen to on Spotify.