Let's hear it for the little guy

Like characters from George Orwell's 1984, grey men march in line through the door of an industrial building. The cement figures, part of a work called Cement Eclipses by Spanish artist Isaac Cordal, are designed to draw attention to the anonimity of city life and humankind's devalued relationship with nature_._ 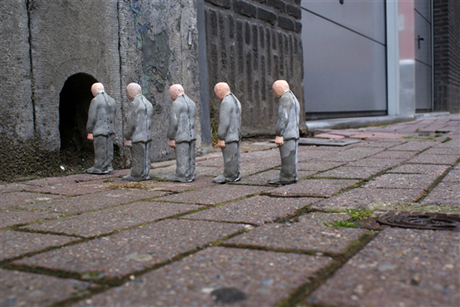 Cordal began making the sculptures in 2002 while at art school in Pontevedra, Spain. The sculptures, which started off large and therefore difficult to move, have gradually become smaller in scale (some around 15 cms) allowing him to place them on the city streets easily. He recently left more than a hundred in East London, many of them on the tops of bus stop canopies so that passengers on the top decks could spot them. The figures can also be seen 'floating' in a leafy puddle in Barcelona and struggling to free themselves from rubble in Berlin. One solitary briefcase-carrying worker stands waiting to be found in Milan. Cordal calls them his "magical gifts to the public". 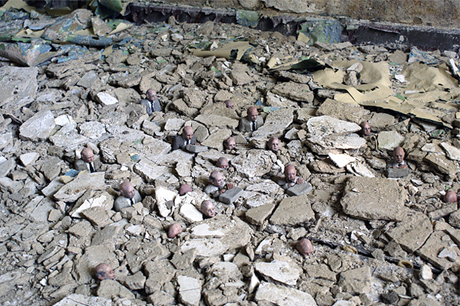 "Their survival on the street depends on many factors," Cordal says. "Their main predators are cleaning services, weekend thieves (they become an alcoholic's Olympic Games), or curious people who think that street art is only for them." Cordal says the figures are a reaction to a bleak social system. "These pieces reflect our own decline. We live immersed in the collapse of a system that needs change." 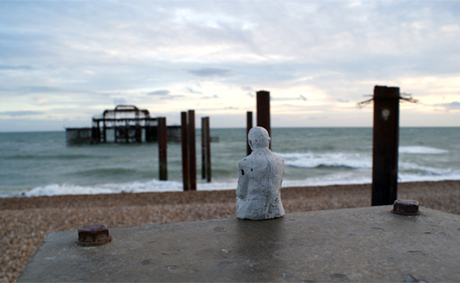 "Cement Eclipses is a critique of our behaviour as a social mass. It refers to this collective inertia that leads us to think that our small actions cannot change anything. But I believe that every small act can contribute to a big change. Many small changes can bring back social attitudes that manipulate the global inertia and turn it into something more positive." 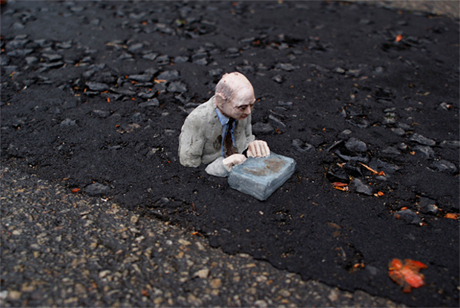