How's this for an Olympic opening ceremony pitch? Jane Harrison, the practice co-director of New York design studio Atopia told The Guardian newspaper yesterday how her firm “devised a structure of petals on tall stems, which would travel from all of the participating countries, then be brought into the stadium by children. The petals would be assembled during the opening ceremony to form a flower-like canopy, and then distributed back to the different nations after the Games."

She claims they put this to the London Olympics committee in 2007 but heard nothing back. Now, Atopia is saying its confidential submission was somehow reinterpreted in Thomas Heatherwick's Olympic cauldron, wherein the 204 flaming petals were brought together at the London opening ceremony last summer, to form a burning bowl. 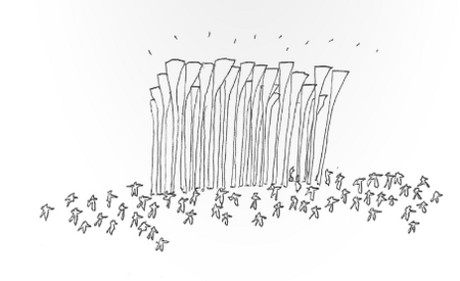 Atopia has only recently been able to make such claims, as a confidentiality agreement, preventing firms from promoting their work on the back of London 2012, has recently been lifted.  The US firm doesn't plan to take any legal action however, as it says it can't afford to fight the case.

Heatherwick himself has described the claims as “spurious nonsense.” Dezeen reports the British designer as saying “the ludicrous accusation that LOCOG briefed us to work with, develop or implement a pre-existing idea and that we acted in accordance with this briefing is completely and entirely untrue."

Film director, Danny Boyle, who served as the event's creative director, is also backing Heatherwick. "I also absolutely and categorically reject any suggestion, whatever its motive, that Thomas or I were influenced by anything other than our obligation to create a ceremonial work of art that celebrated British originality, creativity and engineering," said Boyle, who, as artistic director, commissioned the work from Heatherwick. "This is total nonsense and must not be allowed to spoil our appreciation of Thomas's magnificent work."

Perhaps its unsurprising that, given the type of event, the scale involved, and the ideological ambitions of something like the London Olympics, some pitches might bear familial similarities. For some uncontested great designs, consider our forthcoming Design Book, which showcases the 500 most innovative, beautiful and influential products of the last 500 years that are still in production today.