It's not unusual to see a kite flying on a beach, but Sash Reading and Heather & Ivan Morison's Three Cubes Colliding doesn't look like your average kite. As if defying the laws of gravity this cube, made of a dense mesh of carbon fibre rods and aerospace fabric held together with 1,700 3-dimensionally-printed connectors, floats above a beach on the Channel island of Jersey. There is no sign of a gas filled interior or any engine keeping it airborne.

This success of the work came as no surprise once we found out that Reading is a World Sport Kite Champion and while studying at The Bartlett Architecture College she specialised in lightweight structural design.

Three Cubes Colliding is derived from Alexander Graham Bell's tetrahedral kite which he developed between 1895 and 1910. Reading and the Morrison's somewhat more complex version of Bell's kite is a progression from a previous work by the trio entitled Meteor Kite Mark 1 - in collaboration with Kite Related Design. 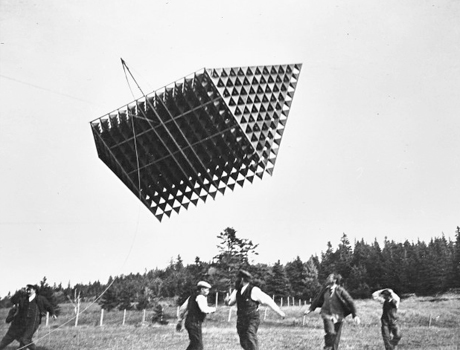 The tetrahedral kite Alexander Graham Bell developed between 1895 and 1910

Meteor Kite Mark 1 was inspired by "the movement of a meteorite through the atmosphere, where the velocity causes matter to deteriorate, thus forming a shape that is larger at the nose and lighter at the tail" Reading says. "This process is replicated in the 3D environment using particle dynamics and animation. In the case of the Black Meteor Kite, a solid cube with the front and back panels removed is assigned to a particle emitter, and the particles are emitted in a random formation. The animation is paused and the arrangement is reflected to ensure even flight, then rationalised into a sail layout for cutting.” 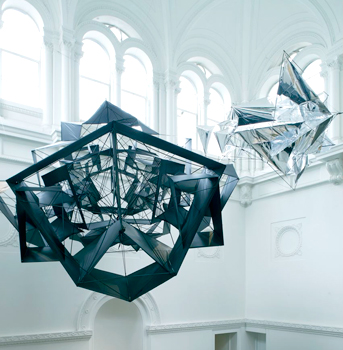 Meteor Kite Mark 1 at the Royal Academy in 2009

Heather & Ivan Morison are perhaps best known for their series of text postcards sent from around the world, a project they began in 2001. From the Carpathian Mountains, Transylvania they sent a card which read: "Heather Morison is dreadfully afraid." Another simply related a list of fungi spotted one summer in New Zealand. More recently in 2007 the pair explored the commercial flower industry creating The Land of Cockaigne, an installation of tens of thousands of individual flower stems at Bloomberg SPACE, London. Last year they toured the less-travelled roads of rural Tasmania with a sculptural artwork in the form of a puppet theatre, Mr Clevver.