This box contains a bedroom

With skyrocketing rents leaving many of us feeling as if we’re living in a small box, Latvian designer Rolands Landsbergs of Boxetti has taken the idea to its logical extreme by creating an actual box containing an entire bedroom. The Bedroom in a Box is an extension of the traditional wall-mounted, fold-down ‘murphy bed’. It's a large rectangular unit that can be moved via remote control. The bed is drawn down and cupboards, a night stand and wardrobe space can be opened up via doors and panels.

Along with the Bedroom in a Box, Landsbergs has created a series of modules capable of transforming into various functional objects – beds, desks, and storage units. Each configuration can be hidden away into a compact box. The product not only boasts one of the most economic uses of space we’ve seen for a while, but the convenience of only having to purchase one singular product – it's ideal for studio apartments. 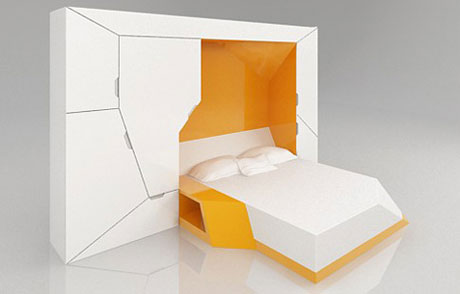 Bedroom in a Box by Boxetti

The designer himself also has some very specific ideas about who his pieces are for. “Boxetti is for people who are interested in minimalism and futurism. They are not only furniture but also design objects. This is an exclusive collection for studio apartments or offices.”