Industrial Facility and Herman Miller transform the office into a 'richer', more collaborative place to do business

As if you needed reminding, collaboration has been the buzzword in offices across the globe for some time now. It’s not just about staff sitting at desks and getting on with their work. They also have to be up and about staging informal meetings on staircases, brain-storming in break-out spaces, and collaborating over their tablets.

Indeed, Herman Miller is on a roll at the moment, in this respect, as hot on the heels of the FuseProject project comes an office furniture system by Londoners Industrial Facility. Theirs is called Locale, and comprises cantilevered, rounded work surfaces that encourage workers to switch positions during the day to better team up with colleagues. This is aided by a dearth of table legs, explain the designers, which means fewer obstructions. 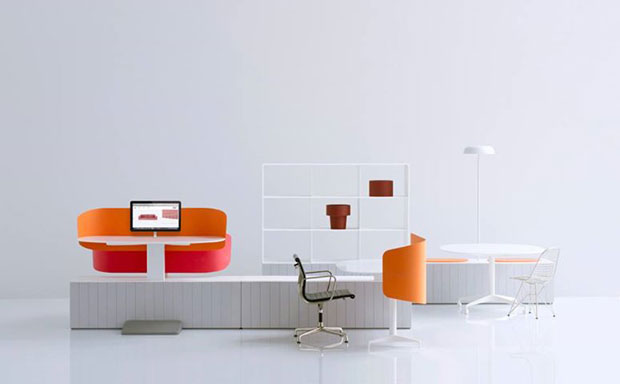 Clusters of activity can happen along Industrial Facility’s ‘workbase’, arranged in modules. So we have the library, the social setting, the working desk and the meeting table along one stretch of desking. And there are useful mobile pieces such as height-adjustable tables, screens, easels, storage, and a refreshment unit, which can be brought over to the ‘workbase’ making what the designers call "an even richer neighbourhood”. 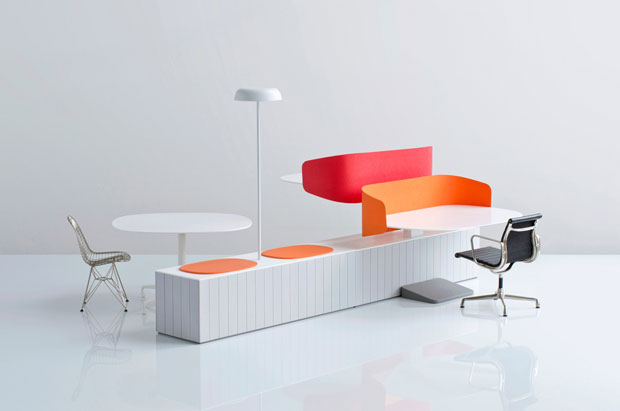 And while terms such as "richer neighbourhood" - are guaranteed to raise the hackles of any old-school office manager they're pretty much spot on. Herman Miller has (understandably) carried out extensive research into the workplace and has come up with the idea that it in a connected world it really should be ‘a place you want to be’ rather than ‘a place you need to be’.

You can chart the changing aesthetics of good office design through a number of Phaidon books - specifically A Taxonomy of Office Chairs and the brilliant The Design Book which features iconic office designs from the likes of Charles and Ray Eames, Arnhold Neustadter, Jacob Jacobsen and Freddy Brown.