Another look at the often overlooked

You may be surprised to learn that the phrase 'the generation gap' wasn't invented in the 1950s as post-war parents raised the first quizical eyebrow at the exploits of their rock ‘n’ roll, fashion and film-loving teenage kids. In actual fact its origins can be traced further back, to 1925 in fact, when it was used by a marketing company to describe the disparity between a mother and daughter’s use of lipstick.

In the 100 years or so prior to the 20th century, lipstick use had been frowned upon as the preserve of prostitutes and certain kinds of actresses. In Britain it had been deemed “impolite” by Queen Victoria and, although previously worn by women (and in some countries men) for thousands of years, had fallen largely out of favour with the genteel classes.

All that  was soon to change thanks, in part, to the women’s suffrage movement. In the US, Elizabeth Cady Stanton and Charlotte Perkins Gilman dabbed on bright red lipstick to symbolise their independence from men. The New York Suffragette Rally of 1912 rally was a turning point, with many attendees wearing lipstick in a mass reappropriation of the look, not unlike the SlutWalks that began in Canada this April and quickly spread across the globe.

This era of emancipation coincided with a revolution in the packaging of cosmetics. French company Guerlain put colour into a stick in 1912 and three years later, in 1915, Maurice Levy of the Scovil Manufacturing Company in Waterbury, Connecticut came up with the clincher - an innovative metal case, resembling a bullet, and capable of mass-production, to contain the previously messy business of lipstick application. 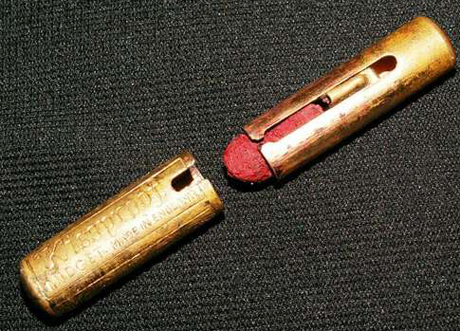 Maurice Levy's 1915 design not only put lipstick in a tube, but also had a lever on the side to make it easier to apply

These first ‘Levy Tubes” were two inches long and had a plain dipped-nickel ﬁnish. A slide lever on the side enabled the gradual progress of the lipstick up the barrel – this however, was soon replaced by a screw thread inside to push the lipstick up. The new product was affordable, adorning the lips of both society women and those in employment. However, its contents still became somewhat rancid a few hours after application made, as they were, from a traditional recipe of crushed insects, beeswax, and olive oil. Enter into the frame a Polish cosmetician called Maksymillian Factorowicz (try shortening that name) who was working with greasepaint as a solution for actresses whose lipstick ran under the hot studio lights demanded by emerging film technology.

Dedicated cosmetic packaging and advertising followed with Maybelline mascara and within years a male to female ratio skewed by World War 1 (there weren't enough men to go round) created a new emphasis on sexual beauty and helped make make up a hit. There's a footnote to this. In 1969 Levy’s swivelling tube inspired a scientist at the German company Henkel to invent a glue for which a pot would never be needed. With the arrival of the Pritt Glue Stick Maurice Levy had effectively given the world two everyday icons for the price of one.