Before the paper clip came along the method for attaching one piece of paper to another - using a ribbon – had been in existence for nigh on 600 years, changing only once in that time when some bright spark realised the addition of wax strengthened the ribbon, allowing more papers to be attached.

Johann Vaaler, a Norwegian clerk, with degrees in maths, science and electronics, is credited with creating the paper clip - though the version he patented bears little visual relation to the one we use today. What is true is that he patented his triangular version first - in 1899. However, it was the Gem Manufacturing company who designed the first double oval shape (in 1890 patenting it in 1907) known as a Gem Clip, we are familiar with today. In Swedish, the word for any paper clip is gem. 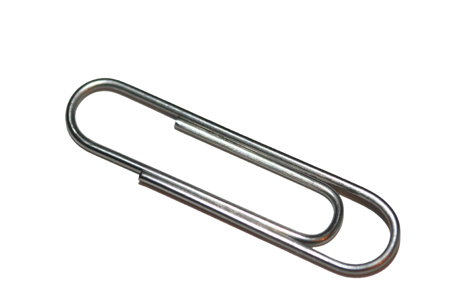 The humble paperclip: friend of clerk, criminal and IT guy

Last year American consumers purchased 11 billion paper clips – roughly 35 clips for every person in the country. Most bought in the US are produced domestically - primarily due to an import tariff the Government places on paper clips from nations such as China. (Plastic-coated clips like the ones in our picture at the top are excluded from the tax.) A machine for mass producing the things was patented in 1899. ACCO, the main supplier of paper clips, has 38 clip-making machines, some more than 50 years old. Each cuts the galvanized steel wire and bends it into clips at the rate of 1,600 a minute.

The paper clip has a set of eight qualities that none of its rivals have been able to match as a whole. It is designed not to catch, mutilate or tear the paper it is attached to. It does not tangle with other clips (in normal use) and is able to hold a thick sheaf of papers. It should be thin so it can be posted cheaply and be made of wire to keep costs down.

It’s also good for getting a compromised CD out of a computer ROM drive, cleaning the dirt from under your nails and for picking the lock of the most commonly used handcuffs (the wearer unfolds the paper clip into a straight line, the end is twisted into a right angle and is used to lift the handcuffs’ lock fixator.) In January a Massachusets dentist was jailed for a year after inserting paper clips into patients' mouths during root canal work, apparently in a bid to save money.

The paper clip has also been put to more politically ambitious use. In World War II, Norwegians were banned from wearing any buttons with the initials or image of the exiled King Haakon VII on them. They rebelled by wearing a paper clip on their lapel – drawn to it by its supposed Norwegian origins and its original function of binding together. Such a protest against the Nazi occupation often resulted in the wearer being arrested and imprisoned.