We're constantly astounded by the amount of innovation in the infant goods market. From nappies to high chairs, potties to changing tables, every designer seems to be busy trying to improve the lives of babies and their carers - naturally we applaud any aesthetic inspiration for the future generation - however early it occurs.

Pentagram's Daniel Weil knows this area well, since the agency rebranded the global childcare retailer Mothercare in 2007 and its All We Know range of toiletries two years later. During his research Weil discovered he could make some fundamental advances in bottle design for newborns, especially the teat. Normally it's centred on the cap, but Weil moved it to the edge.

According to Mothercare, this makes "it easier to keep the teat full of milk while hardly tilting the bottle at all. This results in a natural and relaxed feeding angle, with parents confirming that their babies fed more comfortably, and the bottle helped reduce trapped wind" - important as any sleep-deprived new parent will tell you. What's more, "it also allows you to keep eye contact with the child at a more natural angle," Weil adds. 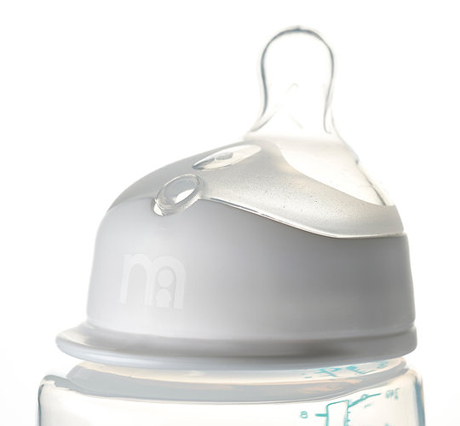 The cups themselves have been reworked too, and now mimic the size and shape of take-away paper coffee cups. The idea is that they'll feel more familiar to 21st century parents, by tapping into their social cues and behaviours.

"The decisions became remarkably obvious once you realise that parenting is a lifestyle," says Weil.  "Parents who are in their 30s had a lifestyle before they had children. They had life experiences, choices; mothers worked, travelled. Suddenly you see the style of the products following the social behaviours of the parents. Bugaboo strollers begin to look like high-performance cycling equipment."

Modern parenting, he believes, is as much a social and cultural activity as it is a biological instinct. "In a way," he adds, "parenting is becoming part of an aspirational lifestyle." Though it certainly will not feel like that at three in the morning, we think this well-designed bottle might help a bit.

To learn more about Alan Fletcher, the brilliant designer who co-founded Pentagram in 1972, take a look at our range of Alan Fletcher books in the online store.