Miami is full of fancy condos, so it helps the developer if they have something unique to shout about. In the case of the apartment block Mybrickell, the Related Group has gone big on its interior designer: the super-talented and equally prolific Karim Rashid.

Rashid has spun his pop-art-inspired magic on everything from the rooms and lobby to the private club and restaurants. Or as the Related Group puts it: “Avant-garde interiors by Rashid feature his signature symbolism and provocative concepts.”

The effect is fantastical, with plenty of shiny orange surfaces, sweeping curves, back-lit art, some of it by the Egyptian-born, Canadian-raised designer himself. 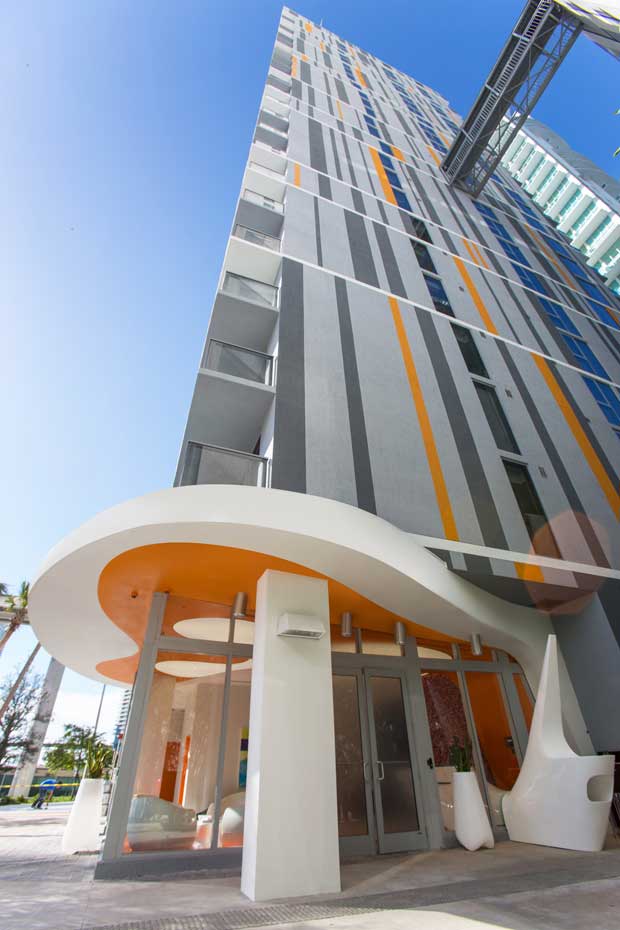 The 25-storey, 184-unit block called Mybrickell sits in the Brickell area of the city by the Miami River. The actual building, a tower adorned with thin vertical stripes in grey and orange, is by Arquitectonica, whose HQ is in Florida’s Coconut Grove.

Rashid’s influence is felt immediately at the ground floor lobby, whose white and orange canopy curves out from the building’s corner. Inside the colour scheme continues. The gym’s utilitarian-looking exercise machines stand on a patterned floor below a ceiling papered in a multi-hued geometric pattern.

Even the pool table in one of the lounges has an orange lacquered surround and glazed pendant lamps – also in orange – suspended above it. 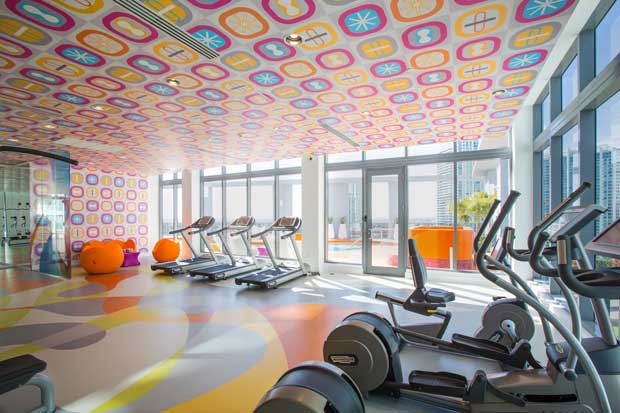 As if one stellar designer wasn’t enough, the client brought in long-time collaborator Philippe Starck to create the organically-shaped pools with their orange, cerise and white colour schemes, and the gardens.

There are reports that these condos are hot property. Just a few weeks after the official opening, the owners of eight units had put them back on the market, valued at nearly 80 per cent more than the original asking price. It looks like Miami’s real estate crash is a thing of the past.

Want to know more about Karim Rashid? Check out some of his product designs, including the Garbino Wastepaper Bin in our recently published The Design Book. You can read an interview with The Design Book's editor, Joe Pickard, here. And if you'd like to learn more about one of the movements that inspired Rashid, check out our book Pop Art in our Art and Ideas series.