If you travel by tube in London or drive in San Francisco the image above may appear strangely familiar. Yes, of course it's a photograph of Yasuo Hattori's wonderful Olympus Trip 35 camera design from 1968 - you guessed that much.

But the actual image is taken from Phaidon's app version of The Design Classics book. Apple has started using imagery from the book to advertise the iPad on the west coast in the US and in the British capital. You can see a photo we took (on an iPhone, naturally) at the Angel tube station in London below.

We were happy to be approached by Apple a few years back when it was launching the iPad. Apple wanted some beautifully designed content that would really show off the capabilities of its new invention. The result was our first app, Design Classics. It's one we're still proud of and one that's still available from the app store with an average four-and-a-half star rating. It's nice to see the company referencing the app in its latest campaign. 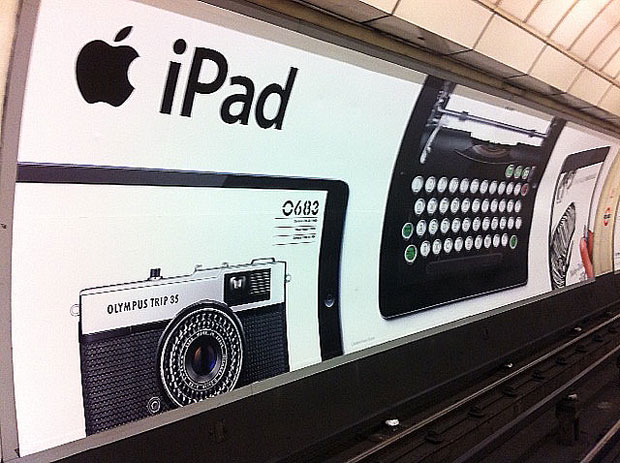 Meanwhile, if you need reminding as to why the Olympus Trip 35 was included in Design Books we reproduce the text from the app (and the book, also still available here) below. Oh, and do tweet us @Phaidon if you spot the ads popping up in your home town.

"There are some cameras that remain in the public consciousness long after they have been discontinued, and in the United Kingdom the Olympus Trip 35 is one of these, the beneficiary of a popular advertising campaign featuring David Bailey, which was first transmitted in 1977. Bailey, perhaps the best-known British photographer, still regards the camera as one of the greatest contributions to photography. The Trip 35 was a palm-sized compact camera using 35mm film. The camera's distinguishing feature was a circular panel of convex transparent cells around the main lens, which collected light for the selenium light meter. The meter automatically set the shutter and aperture and provided a red pop-up low light indicator in the viewfinder window.

The camera was a logical development from Olympus's popular Pen range of half-frame cameras. Half-frame cameras never fulfilled their potential and the Trip 35 camera offered the benefit of a full-frame negative in a camera not much bigger than the Pen, although it did not offer the range of features and interchangeable lenses of the advanced Pen models. It was suited to amateurs who did not need a single-lens reflex but who wanted better quality than a simple fixed box camera could provide. The Trip 35 was backed by a television and press campaign that was extremely effective and popular. This, coupled with the camera's reliability, ensured a rare longevity and the camera was only discontinued when electronics started to offer greater flexibility than the Trip's mechanics could. Its successor, the Trip AF series, was a Trip in name only and adopted electronics and auto-focus to compete in a modern way with a new generation of automatic cameras."