Wikipedia is biting the bullet and introducing new typography in an attempt to standardize and clarify the look of its content across all 187 languages it appears in. Until now, the look of the online encyclopedia’s 32 million or so pages was dictated to an extent by whatever font each computer’s software providers had licensed.

From today, Wikipedia’s text will ask for specific fonts from your computer. For Apple users, headings will appear in serif, Georgia, and body copy will be in that old san-serif favourite, Helvetica. PCs will switch Georgia in favour of Arial. What’s more, the font size has been increased slightly to make all that text more legible and to give the section headings more stand-out. 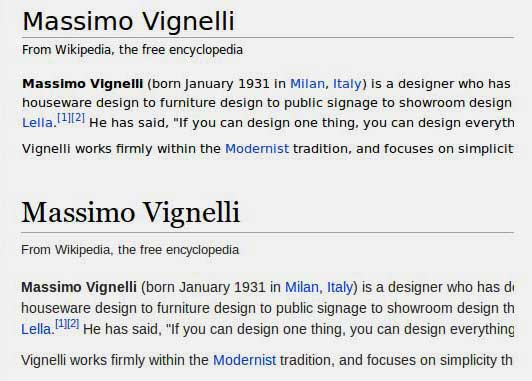 “Text is our core visual element of Wikimedia projects, whether it's an encyclopedia like Wikipedia, or a smaller project like Wikisource and Wikibooks," says Jared Zimmerman, Wikimedia's director of user experience. "We want our users to sense accuracy, reliability, and clarity from our design. We also want to avoid overly flashy typography that detracts from the content. Prior to this typography update, we had more than 20 arbitrarily defined type sizes on desktop alone, which appeared inconsistent for our users. The changes might seem subtle - some readers of Wikipedia might not even know there's a change!”

But even if they go unnoticed, a more fundamental question is being raised by Wikipedia, he adds: “This is bigger than just a change of typography on Wikipedia. It starts to point to [the question], why aren't there open-source typefaces with ubiquitous language support?” Good question. If you want to go futher with some great examples of typography, logo design and branding, check out the Phaidon Archive of Graphic Design and Problem Solved in the store now.