From Mesopotamia to Pennsylvania - how the bearded guy came into being

It’s hard to believe but there was a time before the sound of Santa’s sleighbells and yo ho ho! rang out above the chimneys and rooftops of the world. While historical variations of Santa can be traced as far back as the Mesopotamians, the jolly white-bearded chap of popular myth only came into existence in 1841 – the year when a persuasive Philadelphia shopkeeper called J W Parkinson urged one of his workers to don crimson overalls and climb the chimney of his shop.

The stunt worked and takings rose but it wasn't until 1863 when the image of a chubby, white-bearded man, transported on a flying sleigh pulled by eight celebrity reindeer truly took hold in the public’s consciousness.

In that year political cartoonist Thomas Nast (the man who created the popular image of Uncle Sam) drew a Christmas scene based on the stories of Saint Nicholas he was told as a child in Bavaria. This white–bearded fourth-century bishop, so the story went, travelled from town to town giving out gifts to those who’d been good during the year. 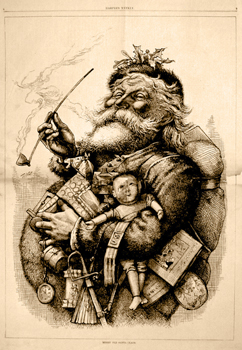 Like many creatives before and after him, (from astronomer Tycho Brahe to comedian Ricky Gervais) Nast decided that the addition of a dwarf or two could only make a good story better so he looked to characters from German folklore to be the helpers or elves who would dispense Santa's gifts. In 1866 his drawing, Santa Claus And His Works, illustrating George P Webster's poem of the same name, also introduced the icy north pole as the venue for Santa’s toy-making workshop. The legend effectively became a brand when, in 1920, painter and illustrator Norman Rockwell took Nast’s drawings as inspiration for his cover of the Saturday Evening Post magazine. 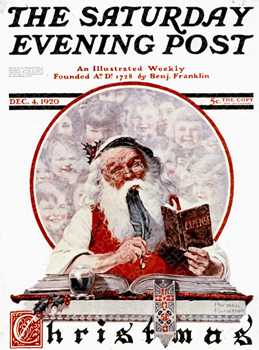 At which point enter Haddon Sundblom, a Michegan born artist of Finnish extraction. Sandblom, or Sunny as he was better known, was enlisted by ad agency McCann Erickson to draw the 1931 Christmas ad campaign for Coca-Cola. The soft drinks company had flirted with the image of Santa for a couple of years, occasionally using Nast’s sterner-faced character. Basing the rosy-cheeked, red-bellied, drawing on himself however, Sundblom’s Santa was altogether a more cheery, approachable chap.

Sundblom’s Santa was inspired by Clement Clark Moore’s poem A Visit From St Nicholas (now better known as The Night Before Christmas).  “His eyes – how they twinkled! His dimples: how merry, His cheeks were like roses, his nose like a cherry; His droll little mouth was drawn up like a bow, And the beard of his chin was as white as the snow.”

A 1942 version of Haddon Sundblom's Santa Claus for Coca-Cola

Sundblom spent the next 33 years drawing Santa scenarios for McCann Erickson to spearhead Coca-Cola’s winter campaigns. His drawings helped Coke's Santa become one of the most recognisable commercial trademarks which, in turn, led to the popular misconception that the soft drinks company actually invented Santa.

However, the artist’s day-to-day work was altogether racier, mostly focussing on glamour models and pin ups. His final assignment - some say fuelled by anger at McCann Erickson’s removal of him from the Coke account - was to paint the cover of the 1972 Christmas issue of Playboy (one of the few painted covers the magazine ever produced). The image? A model holding open a red Santa outfit to expose her breasts.