Shepard Fairey gets on the LA Art Fund bus

Fairey – a graphic designer and graffiti artist, best-known for his 2008 HOPE poster for Obama's presidential campaign – has designed a series of bus advertising wraps and billboard adverts, for the Los Angeles philanthropic organisation, The LA Fund for Public Education.

The Fund's ArtsMatter initiative helps develop arts education in Los Angeles public schools. Within the past year prominent local artists like Barbara Kruger and John Baldessari have produced advertising campaigns for the programme. 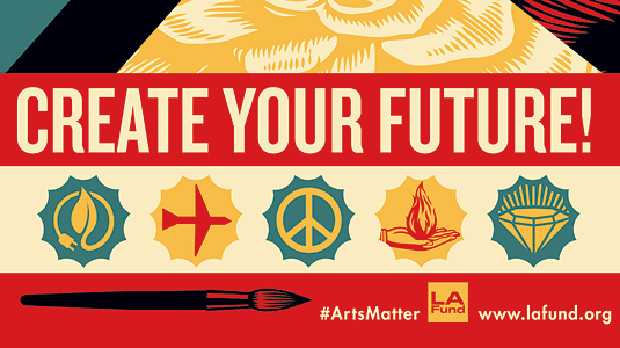 As with the preceding designs, Fairey's work will be displayed on six city buses, 40 artwork billboards, 80 bus shelters and 80 wall-postings for four weeks. However, unlike Kruger and Baldessari, Fairey chose to consult with local students to come up with his campaign, which he dubs Create Your Future. Back in April, he asked pupils to produce pieces in response to his question, “What does the world look like when you take away the things that limit you?" Their responses inspired him to incorporate a leaf - symbolising environmentalism, a diamond - to represent material success - and a peace sign into his creations. 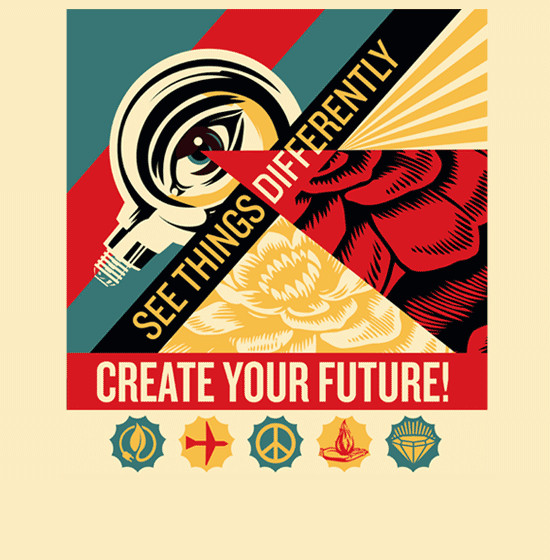 The work, which is on display now until the end of August, offer a pleasant tempering of Fairey's more militant style, while his community engagement speaks well of an artist clearly able to both preach and listen. Find out more about the campaign here. For greater insight into Fairey's predecessors and influences, please take a look at out Archive of Graphic Design, as well as our Iron Fists book, which examines less benign public messages. And, before you do any of that, please heed a campaigning rhetoric of our own: sign up for Phaidon Club if you'd like to take advantage of rewards points, offers and exclusive events.