What do Joel Sternfeld's photos say about America?

Ahead of a new show, Phaidon authors unpack the meanings in this 20th-century fine-art photographer's images

What does a photo of a fire fighter going pumpkin shopping tell us about America? Quite a lot, if it is taken by Joel Sternfeld. The 72-year-old US photographer was, alongside Stephen Shore and Joel Meyerowitz a pioneer of colour photography. Yet Sternfeld’s late 20th century work, part of which forms a new show at London’s Beetles + Huxley gallery, Joel Sternfeld Colour Photographs: 1977 - 1988, remains more than an art history curio. His pictures, as Phaidon authors explain, seem to alight on something at the centre of the US psyche.

“In the background of his pictures there is often an obvious token of Ambition, Nation, Beauty or the Seasons,” writes Ian Jeffrey in The Photography Book, “which is either half-attended to or forgotten by citizens caught up in more immediate matters. His conclusion seems to be that the big idea is only maintained – if at all – with difficulty in the face of local predicaments.” 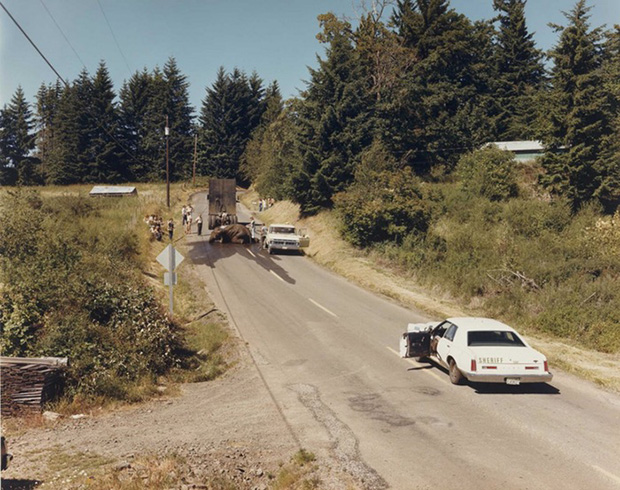 Indeed, it’s not hard to view those local predicaments as illustrating a wider worldview. Writing about Sternfeld’s Exhausted Renegade Elephant photograph from 1979, Photography Today’s author Mark Durden observes “it is tempting to see in this picture of a large creature collapsed and drained of energy, a metaphor for America’s exhaustion.

“Certainly, all is not well in the world of Sternfeld’s pictures. Houses burn and a fireman buys pumpkins. Paradises are artificial, as splendidly shown in a photograph of a swimming pool in the desert with its solar-powered petals. Sternfeld also accents the temporariness and fragility of our habitation of the land with his depiction of a destroyed family home set against a sense of deep geological time suddenly exposed by the indiscriminate wrath of nature in After a Flash Flood, Rancho Mirage, California, July 1979.”

The late 1970s was a period for doubt and self-reflection for many within the West, and Sternfeld’s pictures, either viewed singly or in his most famous book, American Prospects, capture something of this.

Martin Parr and Gerry Badger, authors of The Photobook: A History Volume II, liken Stern’s book to Stephen Shore’s Uncommon Places, which was also the product of an American road trip and was also shot in full colour on an 8x10 view camera. 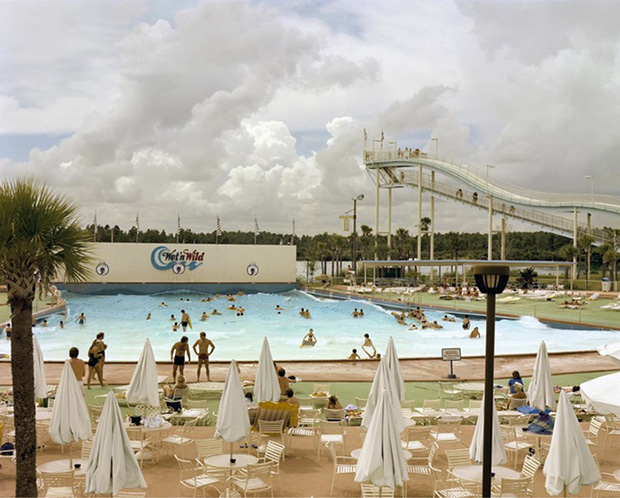 “In American Prospects, each picture suggests an arcane drama being played out,” explain Badger and Parr. “These narrative hints are suggestive, sly, often ironic, frequently mysterious, making American Prospects less a series of photographs than a series of tales – unfinished, elliptical certainly – that add up to a cogent but also persuasive view of America, told with affection but also conveying the feeling that something is not quite right.”

Visitors to this London exhibition, which opens 27 January and runs until 18 February, can decide for themselves whether the mysteries in his early pictures have been resolved, or whether Sternfeld’s intriguing pictures still have something to say about the USA today.

For more on his work buy The Photography Book here; Photography Today here; The Photobook: A History Volume II here; and The High Line here.