Lauren Greenfield on The Queen of Versailles

Lauren Greenfield's photo series and subsequent documentary, The Queen of Versailles, has been on our radar ever since the photographs were publicised at the beginning of the year. Her images tells the story of the billionaire Siegel family as they face the economic crisis, having built America's largest home, a 90,000 square-feet French-chateau style house in Orlando, Florida. Greenfield follows David Siegel, owner of a successful time-share business, and his wife Jackie, as they attempt to scale down their ostentatious lifestyle, no longer traveling by private jet or buying masses of designer clothes. 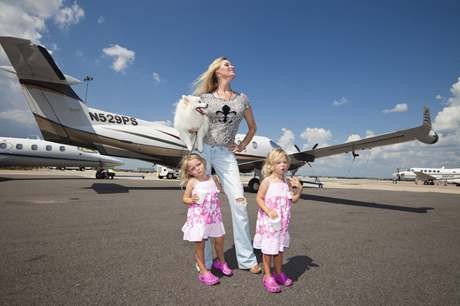 From Lauren Greenfield's Queen of Versailles (2012)

It's a touching series, more nuanced and sympathetic than initial impressions suggest. Greenfield will be at Photoplus Expo in New York on October 26, to talk about The Queen of Versailles and the importance of using both video, audio, new media and still photographs to tell a story and increase the impact of her documentaries. Get tickets here.