A look at the American photographer's haunting portraits, taken while recovering from a serious accident

_"I had a real smash-up on Saturday...my stallion, cantering along way up in the mountains, suddenly staggered, reared back and fell over on me. I was knocked out but my friends say in his struggles to get up, he pummeled my back with his (newly shod that morning, *sigh*) hooves, bouncing me like a ragdoll... ...I came to consciousness in time to see him come crashing down next to me, dying." _Mann went on to describe her own parlous state following the fall.

"Terrible, indescribable. Walked delirious 4 miles off the mountain and have been flat on my back for 6 days- Damaged everything, ribs, sternum, vertebrae, and black and blue from my eyes to my knees. The doctor who came out said, 'You're going to hurt like crap for a long time' and so far he's been right. Sad about the horse, too. I was really crazy about him. Probably an aneurysm killed him. Anyway, if ever I can get vertical and move my arms, beyond typing that is, I will try some printing..."

Indeed the award winning photographer did produce plenty of work during the following few week's convalescence, even though she couldn't move far from her own beside. Mann made her photographs on a large-format film camera, so lugging the equipment out of doors and into the countryside surrounding her house was out of the question.

Instead she decided to capture photographs of herself. The resultant images of her own face (Self-Portraits) and her own damaged torso (Omphalos) are curently on show at the Edwynn Houk Gallery in a show dubbed Sally Mann: Upon Reflection until 3 November 2012. These shadowy, beguiling images are glass-plate ambrotype positives straight from the camera, developed using a long-winded process almost as old as photography itself. This dated and intricate process causes imperfections in the printing with scratches on the surface and even parts peeling off. The resulting pictures are suitably bruised and battered, dark exposures with minimal contrast or focus, causing eyes and facial features to rise from the darkness. To find out more about the exhibition, click here. 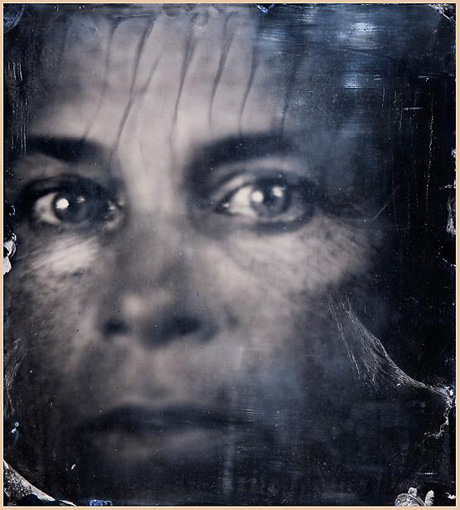