Chinese designers build 'cave' on the back of a bike

Designers in the Far East have a knack of combining funky environments with the humble push-bike. We recently featured the portable ‘house’ – more a groovy room – on the back of a bike in China and now they’re at it again in Beijing. Of course necessity is the mother of invention, or in this case the mother and father. Liu Yang and Xu Dan are both architects, and the parents of a toddler. For the child’s second birthday they bought a cargo bike (which boasts a trailer-like contraption resting on two back wheels) and constructed a frame to sit on the back. But here’s the fun bit, they scooped areas, nooks and crannies out of an 80-cubit-ft block of black foam and sat that in the frame. Several kids at once can explore the warrens, while be transported more literally by a (fit) pedalling adult. Lighting comes from a small skylight. 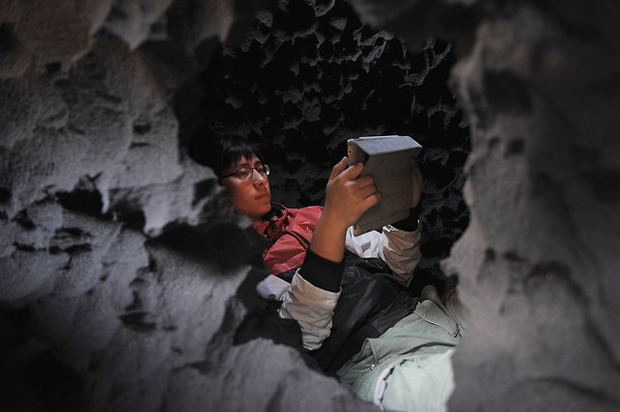 The couple called the cave Eyes Closed. The name comes from the room’s other key use: dozing. The foam is so dense as the space is almost completely sound-proof. “Maybe the child and his father also can take a nap with eyes closed in here,” say the architects. “Maybe the child and his mother also can tell a story or listen to music with eyes closed in here.” For more examples of funky sustainable design check out Vitamin Green.