Straw has been used architecturally for more or less as long as wheat and barley have been under cultivation. Today, the cut stalks of cereal crops form parts of countless traditional buildings, from the thatched roofs of rural England, through to the adobe walls of Malian mosques.

However, last summer, the Portuguese architecture group IUT, brought contemporary architectural techniques out into the countryside around Guimarães, as part of activities to mark the city's status as 2012 European Capital of Culture. 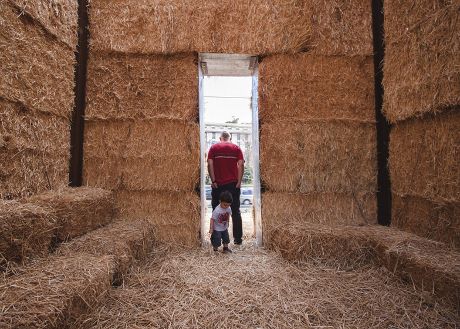 Teams were set the task to build “temporary structures that would stimulate the appropriation of controversial public spaces by the city inhabitants.” The IUT Group, from the University of Minho, took its inspiration partly from the whimsical blocks farmers often throw together in their fields after harvest time, and partly from the bold geometry of inner city dwellings, though we also detect overtones of the Mesopotamian ziggurat in there too.

Though 288 conventional straw bales formed the main foundations and walls of this 13 metre-high “Agricultural Mountain” as IUT dubbed it, there was a thin metal supporting structure, which allowed the architects to nearly double the height of conventional straw-bale structures.

"We visited Spanish and Portuguese farms to study the material. It is usual to see big straw bale 'mountains' in the Iberian farms," the award-winners told Dezeen. "Normally the farmers have only nine layers of straw bales, but we arrived at 15 layers because we changed the construction system and we redrew the shape." 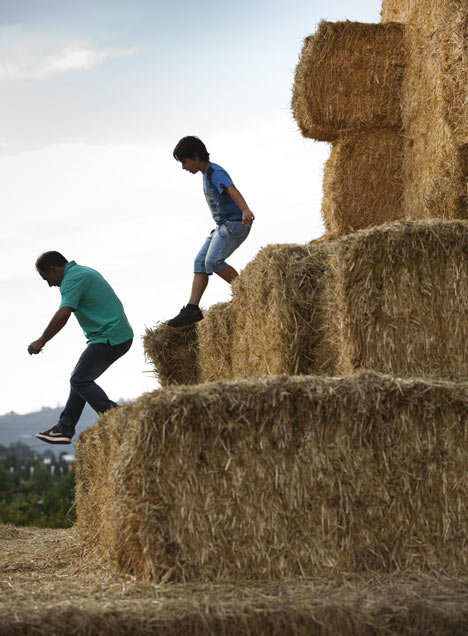 Unfortunately, this temporary tower went with the changing of the seasons, and was taken apart towards the end of September, once the competition had come to an end. The bales were turned over to local stables, while the mountain lives on in the architectural  world, thanks to Portuguese photographer, Nelson Garrido's wonderful shots.

For more on the straw tower, read the full Dezeen piece here, and for further green thinking on architecture and sustainability consider our Vitamin Green book, the definitive work on contemporary sustainable design and architecture from around the world.