Can this building forge a better future for city living?

Though it's been allowing the public in for sometime, The Siemens-backed, Wilkinson Eyre-designed Crystal building in East London opens officially this Saturday.

This hall and conference centre houses the world's largest exhibition dedicated to the sustainable future of cities; it is "for everyone who cares about creating a better future for our cities" and its backers hope it will create "a new independent global hub for debates on sustainable urban living and development."

These are admirable, lofty ambitions for an electrical engineering company, and perhaps indicate how utility provision, urban planning and digital communications are intertwining, as modern cities evolve. Whether The Crystal will give rise to great urban innovations is, as yet, unproven but it's a step in the right direction. 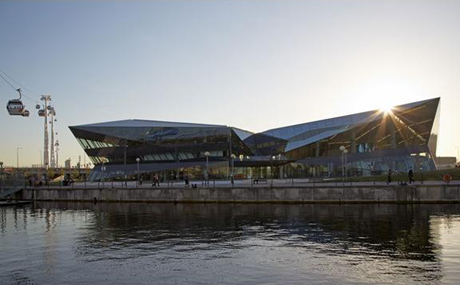 And, it's a beautiful new building. Wilkinson Eyre describe it as being "based on two interlocking parallelogram forms with multiple triangular facets", which "responds to its special location and contrasts with the curve of the O2 Arena beyond." If you're in the south east why not head over there, and see for yourself how the 21st Century's cities could be slicker. If you're not in th area check out our books on sustainable design, architecture and city living Vitamin Green and Living In The Endless City.